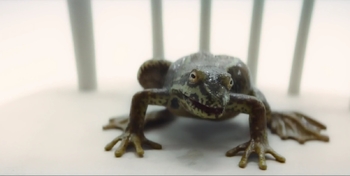 The one where a frog force pushes the Doctor.

The Doctor and her friends land on the edge of a fjord in northern Norway, where the only sign of life is a cottage that doesn't have smoke coming from the chimney despite it being winter. Upon arriving at the cottage, the Doctor and company find that the cottage has been boarded up and Ryan spots someone inside. Entering, they find signs of life, with shoes scattered around the entryway and candy wrappers on the kitchen table. Searching upstairs, Ryan and Graham find a girl hiding in a wardrobe. A sandwich Graham has been carrying in case he gets hungry proves to be the ticket to persuade her to come out. Downstairs, the girl asks how they got in, and the Doctor says they were in the area and asks what the girl is afraid of. She explains that her father went missing four days ago, taken by a monster living in the woods. The fact that the girl, Hanne, is blind only makes her situation harder.

As everyone looks around outside, loud roars are heard, which Hanne explains is the creature coming, as it hunts at this time every day. Searching the shed, Ryan and Yaz find bear traps, but the loud roars of the creature prompt everyone back to the cabin in a rush. Graham, sent upstairs to look out the window for signs of the creature, is distracted when he discovers the mirror at the other end of the room, Hanne's father's bedroom, isn't reflecting him. Ryan and the Doctor come up to see it too, and the Doctor, after taking a peek, deduces that the mirror is a portal of some kind. Hanne wants to come through to look for her father, Erik, but the Doctor won't let her, telling her to stay with Ryan while she, Graham, and Yaz investigate. Hanne isn't happy, disliking Ryan for his automatic assumption that her father ran off instead of having been abducted. The Doctor writes a message to Ryan on the wall, suggesting that he assume Erik is dead, but says aloud that it's a map of the house's vulnerable points. On the other side of the portal, the Doctor and company discover a dark, maze-like space, which turns out to be an antizone, a space between the two halves of the portal, created only at points where time and space is in serious danger.

The Doctor, Graham and Yaz meet a mysterious figure in the antizone, who introduces himself as Ribbons and has the only light source. He offers to show them the path Erik took in exchange for the sonic screwdriver, and the Doctor insists on payment after delivery. Ribbons eventually tries to double-cross them, having cut the string the Doctor was using to mark their path, but gets eaten by the dangerous flesh-moths inhabiting the area. Fleeing, the Doctor, Graham, and Yaz discover the other end of the portal, and through it, a mirror-reversed version of the cabin. Downstairs, they find Erik, who's living with a mysteriously alive version of his late wife, Trine. And there's another new arrival: the late Grace O'Brien. Back in the normal reality, Ryan discovers that the monster roars are being played by a set of speakers outside, but Hanne, already suspecting that he's lying about something and distrusting him, knocks him out by slamming a door in his face, takes the key to her father's bedroom and heads through the portal herself.

Talking the situation out with Yaz, the Doctor realizes that the reality they are in is a Solitract, a sentient universe that was exiled from the main universe because the universe couldn't hold together otherwise. She also realizes that the whole situation is a trap and that they have to get Graham and Erik out of there. Graham, talking with Grace, is initially skeptical that she's really her, but starts to believe otherwise after a long enough talk. However, the Doctor arrives and insists they have to leave. Ryan, after coming to, eventually catches up to Hanne in the antizone, and they head to the other side of the portal. However, they attract the attention of the flesh-moths. Hanne makes it through, but Ryan is left behind to hide. In the Solitract, Hanne immediately realizes that this version of Trine isn't her mother, and Graham finally realizes that Grace isn't really Grace, as she doesn't care about Ryan's safety. Eventually, the Doctor persuades the Solitract to send everyone out except her, and the humans flee back to the normal universe. The Solitract, taking the form of a frog with Grace's voice, talks to the Doctor in a White Void Room. However, the reality is still collapsing because of the Doctor's presence, and the Doctor persuades the Solitract to send her back as well by explaining that friends try to help each other.

When everyone is back in the normal reality, Erik and Hanne decide to return to Oslo instead of their lonely cabin. The Doctor and her friends head back to the TARDIS to travel on, and Ryan, for the first time, calls Graham "Granddad".