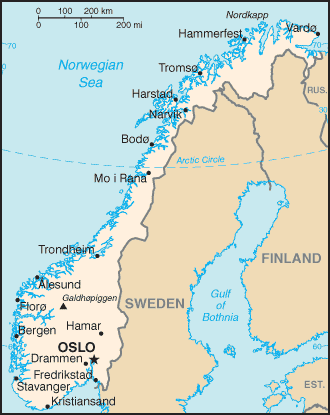 Norwegians display striking amounts of mostly harmless nationalism, which likely grew from the fact that Norway during the late Middle Ages and early modern period always was under the thumb of one of its Scandinavian neighbor-countries. It began in 1380 when King Olaf II of Denmark also ascended the throne of Norway, and it was ratified in 1397 with the advent of the Kalmar Union which united the vast majority of Scandinavia under the Danish crown. After Sweden broke away from the Kalmar Union in 1523 and thereby ended it, Norway would remain in a personal union under Denmark as a part of the realm Denmark-Norway until 1814, where Denmark was forced to give up the entire territory of Norway in the aftermath of the Napoleonic Wars. Though the Norwegians used this opportunity to declare independence, draft a constitution* Making it one of the world's oldest active constitutions, dating to 1814, though it does not accurately reflect the workings of the parliamentary democracy in place since 1884, and install a king of their own, Christian Frederick (who would later ascend to the Danish throne as Christian VIII), part of the peace Denmark had signed had formally ceded Norway to Sweden, so in the summer of 1814 Sweden swiftly invaded Norway, resulting in conquest. Although the Swedes did acknowledge the Norwegian constitution as a part of the peace deal, they forced the recently crowned king to abdicate and renounce all claims on the Norwegian throne, forcing the country to accept yet another personal union, this time under the Swedish crown. Norway would finally achieve true independence as a constitutional monarchy in 1905, following a peaceful separation deal with Sweden, after which it once again adopted a Danish prince, Prince Carl, and his family, gave them Norwegian names, and made them regents.

Pursued a policy of staying outside alliances from independence until the German invasion in 1940. At this time it produced the actual namer of The Quisling, though it had an active and strong resistance movement. Though the Germans could not be resisted for more than two monthsnote This was still the longest that any nation invaded by the Germans lasted, aside from the Soviet Union., the king and the cabinet went into exile in London and was able to rally much of the very large merchant fleet to the Allied cause, providing vital cargo capacity for the various convoys. There were also a number of Norwegian-crewed vessels and air force squadrons fighting under the British. And Norwegian volunteers for the Waffen-SS fighting on the Eastern front.

A founding member of NATO, it turned down EEC/EU membership after two referendums, the first in 1972, the second in 1994. In fact, the EU membership question is so divisive that none of the pro-membership parties actually dare to push for another application for fear of the turmoil it would bring. Norway is also (in)famous for being one of the only developed countries, along with Japan, not to have banned whaling.

The idea of the Free Farmers is old in Norway, and has arguably shaped the picture Norwegian have of themselves. The starting point for this is probably the Heimskringla of Snorri Sturluson, which clearly presents the type. Haakon the Good tried to present Christianity to the farmers assembled at the Trøndelag Thing at Frosta, but was rebuffed by the farmers, who actually threatened the king with withdrawal of support if he didn't give in. Haakon did. Truly a Moment of Awesome for the Norwegian farm culture, and referred to hundreds of years later. At the assembly at Eidsvold, the farmers present craved the rights given to them by Haakon the Good, and the assembly agreed. Thus, through constitutional agreement, the Norwegian farmers had greater property rights than any other farmers in Northern Europe.

The Norwegian farm culture was arguably the starting point for both patriotic movements and romantic nationalism later on. Because of the Danish rule, Norway was not exactly urbanized in 1814, and only slightly more in 1905. The Norwegian farm militia made the backbone of the Dano-Norwegian army during the union years, and has shown some examples of historical badassery. Thus, a militia of 500 armed farmers massacred a better equipped Scottish mercenary band in 1612, during the Kalmar war. Later, feuds with Sweden gave the "Norwegian farmer" just renown, not least in The Napoleonic Wars, when the mostly Norwegian army beat a Swedish invasion force. Twice.

Unlike their Danish counterparts, the Norwegian farmers had the right to bear arms, for the sake of hunting. Thus, they mustered time and again to local revolts when the taxes on behalf of the Danish king became too harsh. And when they did not rebel against authorities, or fought invading Swedes, they fought each other. During a span of 30 years, a local teacher documented several murders and fights done with knife (and sometimes also axes) in one single valley. And statistics tell it was just as bad in other parts of the country. No wonder both Danes and Swedes tended to see Norwegians as somewhat wild and barbaric. But the idea of the free farmer was cherished even in Denmark, where "the Norwegian" came to be compared to the noble savage.

From the trope mentioned, we also have the delicate balance between center and periphery, which has been central in Norwegian domestic policy for decades. People who live in one place will actually take great pains to stay there if they can, although mobility often is easy.

The current or actually "non-existing" EU dispute can also be said to owe some points to this fact.

National peculiarities include two different written versions of the language (one based on Danish, one based on various dialects), and, thanks to the oil industry, more money than it can spend (note that the government has been commended by various economists for being disciplined enough to refrain from spending the petroleum income irresponsibly, thus avoiding "Dutch disease"). The language struggle trope is actually in close connection to the "free farmer" as it is their language that was put into writing. And Norwegians have fought over the topic ever since...

The language struggle has arguably been the most popular topic for bickering in Norway. Norwegians talk much about weather, but there is a constant bickering on the subject of correct grammar, to the point that "correct Norwegian grammar" hardly exists. The result is that a lot of "personal" writing standards can be found, as well as a strong will to preserve the existing dialects, who again is debated on correctness Up to Eleven. All in all: Norway is a peaceful country, but this quarrel has made people take to the streets more than once, and at least one prime minister had to resign because of the matter.

Another trope to be seen as "especially Norwegian" (a phrase that is more of a meme than a trope in the Norwegian language), is what can be described as "serfdom syndrome". Though Norway is one of the richest countries in the world by far, with a stable government and political system, and rated to be one of the best societies in the world by the UN, Norwegians still feel inferior. This is the "serfdom syndrome". The syndrome was probably developed during the Union times, when all decisions were made elsewhere (in Denmark), and repression was more of a rule in the country at large. When finally gaining independence, the syndrome persisted in a self-awareness that goes two ways: either Norway is never good enough, or Norway should by all costs not think they are. The trope is mostly to be found in the political elite, in what may be considered a reverse kind of national chauvinism. It Makes Sense in Context. Actually.

Some unusual cultural exports of recent years include music in the genre known as Black Metal, the novel Sophie's World by Jostein Gaarder which became remarkably popular worldwide (published in 54 langugages and more than 30 million copies sold) and crime novels by authors like Karin Fossum translated into several languages as part of the vogue for Scandinavian detective fiction.

Probably the most famous Norwegian is the realist/modernist playwright Henrik Ibsen. Other Norwegians with at least some international recognition include:

Norway has at least four distinct regions, Northern Norway, Western Norway, Eastern Norway, "the south" and Trøndelag, often set apart from most of the country at large. Inside those regions, there are even more complex distinctions, but let us, for convenience, discuss the regional tropes:

Some notes on culture

There is something called "Norwegian culture", though nobody native to Norway knows exactly how to define it. Not even the Norwegian Ministry of Culture. There are even some who actually claim that Norway has no culture of its own, and that everything is imported. The debate in question is of course related to the Norwegian Serfdom Syndrome mentioned above.

To be precise, or to confuse even more, there are a number of "partial cultures", immigrant cultures aside. The different sets of thinking are of course mirrored in the many regional stereotypes, but mostly in the folk culture niche. Norwegians are, as a rule, terribly proud of their rural culture, and their national costumes are more diverse than in most countries. Although one can present "the west" as a unit, the same area consists of four counties, each with several distinct dialects, and at least as many different rural ways of traditional dressing. And considering there are 19 counties in Norway, the number of differences are immense. And that is just the costumes. In some areas, differences were found almost from farm to farm (a Telemark joke states that the border line between "western" and "eastern" dialectal mode goes exactly through the middle of a bed used by a married couple in the valley of Flatdal, Seljord municipality).

The music and folk dances differ and vary even more. There are at least twelve different ways of dancing the most prominent folk dance, and the sheer amount of fiddle traditions can make your head spin. The Hardanger fiddle area, not covering more than an estimated third of southern Norway, has a collected record of tunes published in seven volumes, and the editing of this music to print took 30 years! Even so, the editors was not able to cover it all. As mentioned, Norwegians take pains to cherish their folk music and their fiddle traditions, both on regular and Hardanger fiddle. And one should consider the differences in traditional outcome when also considering the total of Norway's population: less than 5 million people, and the most sparsely populated country in Scandinavia (except for Iceland) is Finnmark, with 1,5 people per square km. That's what a number of narrow valleys do to people: they tend to do things differently. And of course, Norwegian folk musicians don't agree on anything. But they are as a rule pretty good at what they do.

Of course, Norway has produced a number of authors, playwrights, actors, composers, artists and painters, and has a film industry of its own. There is a lot to be said of "Norwegian film" as a deconstructed meme. Norway has also a number of cartoonists, with the Pondus series as the best known and most successful one. In this respect, Norway has a culture like every other nation. But Norwegian bickering makes it very hard to define it. 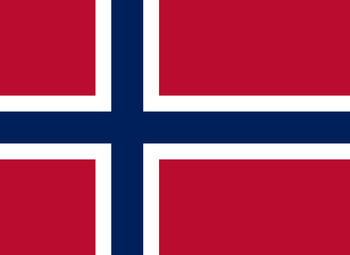 The flag takes the Dannebrog design (a cross whose vertical axis is aligned towards the hoist). Red and white recall Norway's political union with Denmark (1521-1814), while the blue to that with Sweden (1814-1905).
Coat of arms of Norway 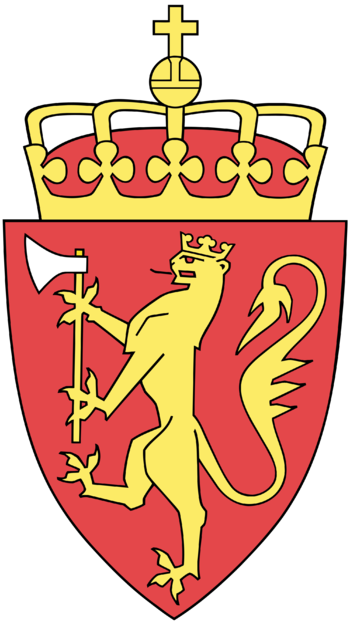 Because of Norway's multi-party system, while the Labour Party is technically in charge of the country, they only have a minority of seats in the Storting. In order to maintain power, they require support from several smaller parties. If enough minor parties withdraw their support (like the Christian Party almost did), the Conservatives would lose power.