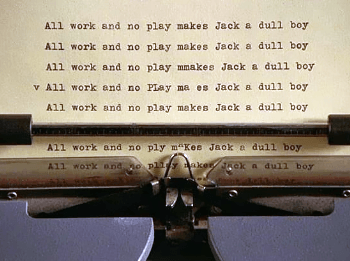 Sometimes, this chanting allows the character to snap out of their insanity. Sometimes, it becomes their life-long theme song as they rock back and forth in a cozy padded room. If they aren't locked up, expect a room with every square inch stating the phrase. When combined with As the Good Book Says..., the ominousness goes through the roof.

Just about every mental institution scene has someone chanting some sort of non sequitur in the background. And woe betide us all if this non sequitur should be significant.

May result in the terms becoming meaningless and possibly descend into a strange form of Mondegreen thanks to the human knack of picking up patterns out of nothing.

Contrast the Talkative Loon, who at least varies the chatter. Compare to Cluster F-Bomb and Rapid-Fire "No!". If this involves singing, see Tuneless Song of Madness.

A Survival Mantra is an attempt to master fear and pain, but when it doesn't work, you find the point where that trope crosses over into this one.

The poor Military Macaw in the cage does this by spinning and repeating, "I'm a pretty bird!" over and over again.

The poor Military Macaw in the cage does this by spinning and repeating, "I'm a pretty bird!" over and over again.