Nobody escapes the Weather. 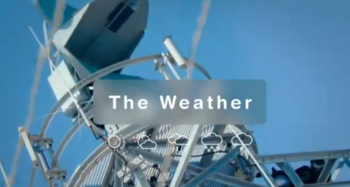 The Weather is a series produced by Wham City in 2019, and broadcast by Adult Swim for their online stream. It's a comedy sketch show with an interactive format, each episode themed around a specific type of weather- such as "Sunny", "Cloudy", and "Slightly Too Hot".

A Spiritual Successor to The Cry of Mann, The Weather was uploaded to [adult swim]'s channel every Thursday night, and viewers could call in and speak to the characters. The cast of Wham City star, and on occasion, one of their friends will act as a guest-star for the episode.

Hilarity Ensues, with callers tossed into situations they don't understand, surreal scenes, and a whole lot of green-screen. It also contains scenes from other Wham City videos, like Johnny Bubble

, adding to the surreal and disjointed feeling.

Tropes present in The Weather:

The Weather- Slightly Too Hot

The cast breaks into laughter as Alan starts messing around with the scene.

The Weather- Slightly Too Hot

The cast breaks into laughter as Alan starts messing around with the scene.