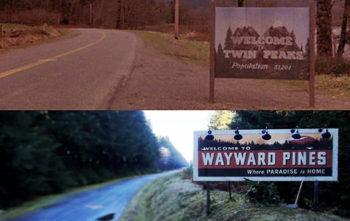 Considered one of the most influential TV shows in the history of the medium, Twin Peaks has inspired many an allusion and/or parody.

The elements that are referenced and parodied most often are: the quirky-yet-eerie small town setting, the murder victim, the tagline ("Who killed Laura Palmer?"), owls not being what they seem, the town limits sign, the Log Lady, and the iconic Black Lodge visions.