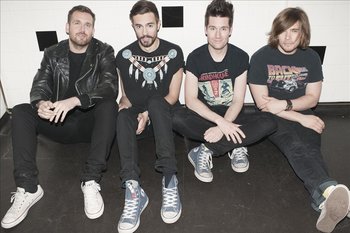 But if you close your eyes, does it almost feel like nothing changed at all?
Advertisement:

Bastille (sometimes spelled with a triangle) is an indie rock band, currently consisting of Dan Smith (vocals), Kyle Simmons (keyboard), Will Farquarson (bass), and Chris "Woody" Wood (drums). It was formed by Smith as a solo project in 2010, in London.

Their first album, Bad Blood, was released in 2013, though they had gotten considerable attention before that for their EP Laura Palmer. Both their singles "Pompeii" and "Of the Night" peaked at #2 on the UK Singles Chart while the former peaked at #5 in America. In 2014, the album was reissued as All This Bad Blood with ten extra tracks.

Their sophomore album, Wild World, was released in 2016, to better reviews than their first album, although singles were slightly less successful. Their third album, Doom Days, was released in 2019, to similarly positive reviews and middling commercial success. In 2022, they released their fourth album, Give Me the Future.

Tropes associated with Bastille include: