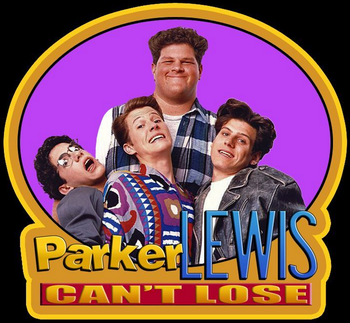 Parker Lewis Can't Lose was a sitcom on Fox, running from 1990 to 1993. It centered around a good-hearted (but low-scrupled) High School wheeler-dealer and his two associates, and the scams, cons and manipulations that they got away with (mostly) day to day. It starred Corin Nemec, now known for playing Jonas Quinn, the former Trope Namer for Suspiciously Similar Substitute on Stargate SG-1.
Advertisement:

In later seasons, the show's title was truncated to simply Parker Lewis. In one episode the title character has such unusually bad luck that the main title credit was changed to Parker Lewis Can't Win.