Sitting Sexy on a Piano 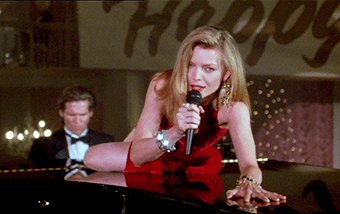 I bet none of you noticed the pianist upon first glance.
Advertisement:

Stock pose for sultry songbirds of every type, from cabaret crooners to navy nightingales. In essence, the singer sits on or leans heavily against a piano, posturing suggestively. If the piano is big enough, she'll often actually lie on top of it.

Compare Ready for Lovemaking, which this is no doubt meant to invoke. There's often some playful teasing going on with The Piano Player— and of course, the audience.

Do not expect her to be paired with a Lounge Lizard, unless he's actually a competent pianist. Compare Elegant Classical Musician, when the attractive person is playing the piano.

Jesus before Herod in the 2000 Jesus Christ Superstar film

Jesus before Herod in the 2000 Jesus Christ Superstar film