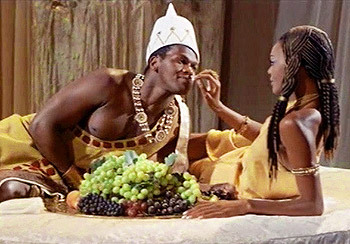 He was the man who had everything. Land. Power. Grapes. A lot of grapes.
—Horrible Histories, describing Nero
Advertisement:

To demonstrate the excess and luxury of wealth, a character will be shown reclining and being fed some small tasty food, usually grapes. The character can be reclined on a couch, a throne, a stack of luxurious pillows, or even the lap of an attractive servant. Frequently included in the scene are live performers, such as belly dancers or musicians, and servants shading or fanning the reclining character. Bonus point if the character demands that the grapes be peeled. If part of a Drunk with Power plot, expect the feeders to be unwilling and, once status quo is restored, resentful. In some cases, chocolate or other food may be substituted.

The poor man's version of this trope involves being pampered by a loved one, especially if that loved one is (or would like to be) romantically entangled with the recipient. See Through His Stomach.