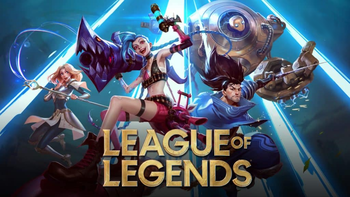 is a free-to-play Multiplayer Online Battle Arena game and Spiritual Successor to the widely popular Warcraft III custom map, Defense of the Ancients, and claims to be the most played game in the world. Yes, even more than the behemoth World of Warcraft.

Like DotA, League of Legends gives you control of one Champion, who has unique attacks and abilities, and sends you out against enemy Mooks and Champions to earn experience points and gold. Your goal is to destroy the enemy base (the Nexus) by first eliminating the turrets that defend it, which usually requires a heap-load of Cannon Fodder Mooks to tank the turret blasts while the Champions whittle it down. There are also a number of secondary objectives scattered around the map which grant significant bonuses to whoever claims them.

The Framing Device originally revolved around the titular "League of Legends", a magical battle arena used to settle disputes between the competing factions living in the magical fantasy world of Runeterra. The lore has developed in a massive way since then, employing a Continuity Reboot that wrote out the League entirely in favour of focusing upon the living tales of individual characters and entire nations that populate Runeterra. The ongoing lore is now primarily communicated through Universe

Unlike the Champions who start each match at Level 1, the Player Character Summoners are persistent and gain experience with every battle. Summoners can also directly improve a Champion's stats during gameplay by equipping "Runes", and bringing two Support Powers into battle.

League of Legends, like all MOBA games, stems from Defense of the Ancients, originally a Warcraft 3 custom map, which itself was based on Aeon of Strife, a Starcraft custom map. LoL currently competes with several other games that originate from DotA, including its own direct sequel, Dota 2. However, LoL has many distinct differences from DotA, most of which simplify the game to some extent. Riot Games pushed it heavily as a professional e-sport, and it has long since eclipsed the original DotA's popularity. Like we said: most played game in the world.

After awhile, the Battle Royale shooter genre popularized by Fortnite dethroned it, but League certainly left their mark in the stages of gaming history.

The game has two playable modes, each between two opposing teams of up to five players:

On top of this, in November 2013, Riot started releasing "temporary game modes" that are only available for a limited time. Riot has a "Featured Game Mode" queue that opens at a somewhat sporadic schedule, with specific game modes being available for play on a rotational basis. These game modes include:

On June 25th, 2019, Riot released another mode, Teamfight Tactics which became its own standalone title.

The Characters pages list every commercially-released champion, detailing tropes related to their backstory, appearance, and gameplay mechanics, and a few other characters to boot. The numerous memes spawned by the community can be found here. The numerous Shout Outs to other medias can be found here. For details on the professional teams and their members, see Professional Gaming under the MOBA folder. For the truly daring, the Drinking Game page can be viewed here.

The game has since formed the crux of an entire media franchise including several other games, comics, animated series, and music.