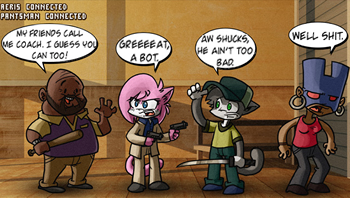 "Some poor bastard desperately needs/wants an item from a BCNM, an item he cannot afford to or is unable to purchase. Thus, the aforementioned poor bastard must organize a band of people he has never met before and trust them to not rip him off.
We call this a prick up group."
— GM Dave

You're playing a MMORPG, and you decide that you need a group of people to take on the next dungeon/mission/area/cake.... but all of your friends are either offline or clinically dead. What's a player to do? Never fear, you can find a Pick-Up Group to play with! After shouting things like "LVL 654 MUNCHKIN LFG!" for five minutes or so, you will be rewarded with an Adventuring Party to kill things with! note LFG, for those not in the know, means "Looking For Group." (No, not that way. Get your mind out of the gutter. Not the comic, either.)

Gaming with a Pick-Up Group works just fine for the earlier missions of a game, because it doesn't get difficult until later. But at some point, the missions will require carefully-built characters, everyone knowing what the rest of the group is good at, and maybe, just maybe, communication. Pick-Up Groups are not known for any of these things. Once you start entering challenging dungeons with a Pick-Up Group, expect a Total Party Kill, possibly helped along by a Leeroy Jenkins who rushes in and aggros everything.

Pick-up groups (or PUGs) vary widely in quality; while some will be filled with moderately-experienced players, the rest will be horrible, consisting of either new players or old players with no tolerance for new players. Unsurprisingly, such a group will usually fall apart after a few wipes, leaving you with the options of either giving up on whatever precious little progress you've made or looking for replacements.

Unfortunately enough, variations of this affect nearly every team-based online game the world has ever known, although it's usually in a Player Vs. Player setup. A clan or at least a somewhat organized group will almost always triumph over an enemy group consisting mostly of clueless players that don't pay attention to anything but themselves.