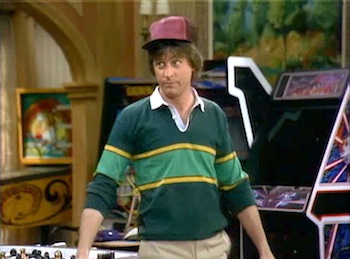 Just as a chessboard indicates a smart character and golf clubs indicate an upper-crust executive, a quick way to establish a character's frivolous personality is to show him having a pinball machine or arcade video game in a home, work, or personal environment. Such a character will typically be almost Always Male, and is either The Slacker, a Manchild, One of the Kids, a Cloudcuckoolander, or something comparable.

Since a good-condition machine typically costs more than a personal computer, such a prop establishes some level of wealth for the owner; having multiple machines serves to further emphasize the character's extravagance or misguided priorities, especially if he's already financially challenged. Actually playing with the game is not required; simply having it in the background flashing its Attract Mode is enough to make the point.

Sometimes, in order to establish a character as The Smart Guy as well as one of the above traits, it'll turn out that he built or restored the machine himself. Lots of Hacker Caves have one of these in the background somewhere. (Truth in Television; MAME-based replica cabinets are a popular project for electronics hobbyists.)

If the game is actually based on the character, that could be a further sign of extraordinary wealth or an overinflated ego.

Note that this trope does not apply when the game in question is in a location that reasonably should have such things, such as a video arcade, bar, laundromat, or boardwalk. Similarly, having a home video game system doesn't qualify for this trope, as those are affordable for most people.

Truth in Television, as demonstrated below - these sorts tend to be die-hard arcade enthusiasts or collectors rescuing a few cabinets or buying "HUO" (home use only) machines. The cost of running and maintaining one does wear out a wallet, of course.