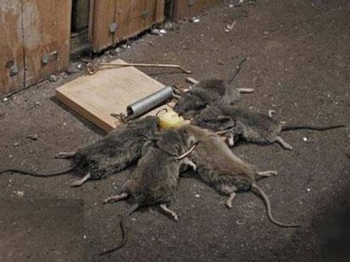 Share victory. Share defeat.
"But if tomorrow, it turns out we got smacked down
If we're dead, our hit points worn away,
Then sorry dude, you won't be coming back now;
One death sucks, but six spells T-P-K."
— Elan (to the tune of "O Danny Boy"), The Order of the Stick, strip #445

The entire adventuring party dies in an epic blaze of glory!

... wait, no, that's not quite right. The party was trying to quietly and discreetly remove some guards, and Bob decided to use a tactical nuke in hand-to-hand combat. The remains of the group wouldn't fill a coffee can.

A Total Party Kill (abbreviated “TPK” among many roleplaying gamers) is often the result of complete player idiocy. Occasionally, the Game Master won't balance an encounter well, and the mooks are much bigger than he thought. And some days, the Random Number God just doesn't like you, and your dice collectively vote for the party's violent demise in the most embarrassing way possible.

When this happens in a MMORPG, it's called a "Party Wipe". It happens disturbingly often when you enter a level-appropriate dungeon with a Pick-Up Group. A Leeroy Jenkins is likely to be involved.

Not the same as Rocks Fall, Everyone Dies: in that trope, the Game Master deliberately kills everyone. Here, players die due to getting in over their heads. If the Game Master values the current plot or characters, he may save the group, but otherwise, it's time to roll up another party. Also differs from a game going Off the Rails (even if it causes the destruction of the party, or the whole world for that matter) in that the GM never actually loses control of the situation; rather, the players get hosed through either incompetence or bad luck, or most often, both.

Compare Redshirt Army. See also Kill 'Em All. For incredibly stupid ways you can do this to yourself in in video games, see Yet Another Stupid Death. Game Over is a supertrope to this one.

Since this is a death trope, expect spoilers throughout.