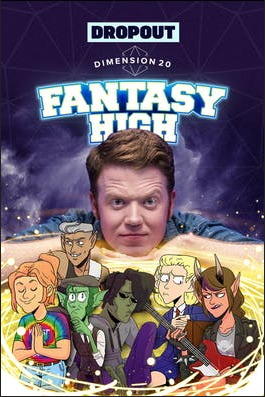 A tabletop adventure show on CollegeHumor's spin-off site, Dropout. Dimension 20 is hosted by Brennan Lee Mulligan and the cast is mostly made up of past and present CollegeHumor cast members. Dimension 20 quickly proved to be a fan favorite, and a second season featuring the same cast but a different setting and campaign was put into production before the first season finished airing as well as a 6-episode sidequest. These additional campaigns proved popular enough that Dimension 20 has now expanded to become arguably Dropout's biggest draw, with multiple series starring the "Intrepid Heroes" from the first season, across three (so far) different settings, plus a variety of spin-offs of varying sizes. Although it hasn't reached the same level of success and far-reaching appeal as Critical Role, at this point Dimension 20 is one of the best-known Actual Play TTRPG shows on the internet.

Season 1, Fantasy High
Follows a group of misfit students at Aguefort Adventuring Academy, a high school for heroes in a strangely suburban area of a traditional high fantasy realm. Thrust together under the most Breakfast Club of circumstances, they very quickly get embroiled in a mystery that it seems like adults should probably be handling. And things just spiral from there. 17 episodes, plus 2 bonus episodes.
Season 2, Escape from the Bloodkeep
Follows the lieutenants of Zaul’nazh, the Lord of Shadows and their adventures at the afformentioned Bloodkeep. The final push towards conquering the world of Man has gone awry, and our team of villains must sort out what has gone wrong while trying to survive. 6 episodes.
Season 3, The Unsleeping City
Takes place in a fantasy version of New York where magic is hidden from the waking world. Six residents of NYC have come together to fix the upset that has come between the realm of the waking and the unsleeping world. 17 episodes.
Advertisement:
Bonus Season, Dimension 20 LIVE (Fantasy High: Sophomore Year)
A continuation of Fantasy High and the first Dimension 20 season to be produced in a livestream format rather than prerecorded. Follows The Bad Kids and friends during spring break of their sophomore year as they travel around Spire to find the crown of The Nightmare King. 20 episodes, plus 2 bonus episodes.
Season 4, Tiny Heist
Follows the tiny denizens of the little world in your own backyard. The land of littlefolk and fairies isn't as friendly as it seems, and our heroes are out to snatch a big score from this world's most influential crime boss. Features the McElroy family from The Adventure Zone as players. 6 episodes.
Season 5, A Crown of Candy
Follows the royal family of Candia in the continent of Calorum, where political machinations threaten the food-themed land's uneasy peace. 17 episodes.
Season 6, Pirates of Leviathan
The first season to be a spinoff of a previously established Dimension 20 universe, as it's set in the Fantasy High universe but does not feature The Bad Kids or Elmville. Instead, it takes place in the floating pirate settlement of Leviathan within the oceans of Spire. It's here we follow a motley crew of buccaneers as they adventure through the briny deep. 6 episodes.
Season 7, The Unsleeping City: Chapter II
Takes place three years after the initial events of The Unsleeping City as the Dream Team, joined by two new faces, reunites to confront the unfettered capitalism presented by the massive media corporation Gladiator as it threatens both the dreaming and waking worlds. 18 episodes.
Season 8, Mice & Murder
Set in an alternate version of Victorian England populated entirely by anthropomorphic animals. The cast, a motley crew of criminals and detectives, attend a lord's birthday party rife with intrigue and murder. 10 episodes.
Season 9, Misfits and Magic
Set in a world much like ours, where a prominent wizarding school has accepted four American students to learn the ways of magic. Endless shenanigans and culture clash is sure to ensue. 4 episodes.
Season 10, The Seven
Welcome back to the world of Spyre, home of the Aguefort Adventuring Academy! But this isn't about the Bad Kids this time. Instead, our adventure focuses on The Seven maidens who have forged their own adventuring party and their incredible adventures. 10 episodes.
Season 11, Shriek Week

Welcome ghosts, ghouls and non-boo-nary pals to Bram University, an institution of higher learning for mortals and monsters alike. We'll be following four college students who are looking for love in all the wrong places. Four episodes.

Set in the universe of Starstruck, a graphic novel series by Elaine Lee, this season is a space opera that follows the crew of the spaceship "The Red Hot" as they try to make a living in a tough, lawless galaxy. Uses the SW5e (Star Wars Fifth Edition) RPG system instead of regular 5e.