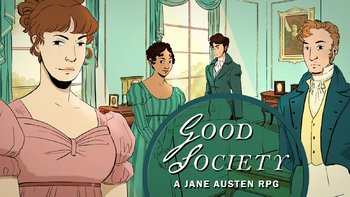 To be fond of roleplaying is a certain step towards falling in love.
Advertisement:

Good Society: A Jane Austen RPG is Exactly What It Says on the Tin. Published by Storybrewers, it's a heavily narrative focused game (as befits it's subject material) about wealth, status, security and affection. The players will in essence play through a Austen Novel, trying to guarantee their reputation stays in tact while perusing happiness, money, social capital, or some combination of the three, for themselves, their friends, or their family members. Also, there will be a lot of irony, bonnets, and balls.

Players take the role of Regency Era Gentry, living in the countryside while they attend dances, go to tea, maneuver socially, and seek marriage. Each player has control of a single Major Character, with their Role as their 'class': an archetype from Austen's works be it a wealthy Heir, a spirited Dowager, a good natured Meddler, or one of the many others. Each Major Character has a Desire (their burning objective throughout the game) and a Relationship with another Major Character (be it a secret fiance, bitter rival, old flame, or something else). Each player also takes control of one or two Connections, minor characters who complicate the lives of Major Characters, be it another Major Character's friend, suitor, family member, protege, tutor, etc. The Facilitator (Game Master) takes control of all the other Connections and NPCs, as well as sets the scene, creates complicated situation and keeps the plot moving and structured. They can make a Major Character as well, and if there are too few players are encouraged to do so.

If you are expecting to roll dice, you will be disappointed: the game is wholly narrative focused. It's main mechanic is Resolve Tokens and Monologue Tokens. Resolves Tokens can be used to change the circumstances and orchestrate the fortune and misfortune of other players or yourself: you either trade it to another player in exchange for causing them trouble or putting them in a tough spot, or the Facilitator if you are just causing general mayhem. The Facilitator can also bribe players with Resolve Tokens to have their characters commit folly, walk into a tight spot, or adopt a sudden and foolish viewpoint (like desiring to flirt with that nice gentleman who is defiantly not a cad just after your money). Monologue Tokens can be tossed at other players to have them give insight into their characters thoughts by monologuing what's going on their heads.

Most play is done in 'novel chapters': either a collection of scenes between the various Major Characters, a single large event, or a mix of the two. There are several other 'phases' of game play, most notably Rumor and Scandal where the players devise the rumors flying around society (or spread them) and Epistolary where the players can can narrate letters in which they might reveal their thoughts, arrange parties or business, and generally twist circumstance- in the last session it will also serve as the Epilogue, the letters being written in the distant future.

There is also the Reputation Phase, where how the characters have acted comes back to haunt them: if they disgraced themselves either mildly or majorly (for example Emma Woodhouse slighting Miss Bates in Emma or Elizabeth showing up in a mud stained dress at Netherfield in Pride and Prejudice) in a Novel Chapter they acquire a Negative Reputation Tag which determines the preconceived notion of any but your closest friends. At three Negative tags you face a nasty consequence(from loosing your inheritance to being unwelcome in your own home). But conversely comport yourself well and you might gain a Positive Reputation Tag, which colors how you look in the eyes of others and at three of those you gain a great boon (from a wealthy relative coming out of the woodwork to your family suddenly thinking you can do no wrong). Players must balance their Major Character trying to pursue their Desire and maintain their Reputation, or face being tossed from good society forever.

In July 2020 Storybrewers released Good Soceity: An Expanded Acquaintance, a collection of four major expansions and two mini expansions which add new rules, themes, and settings that can change the game completely. They are: