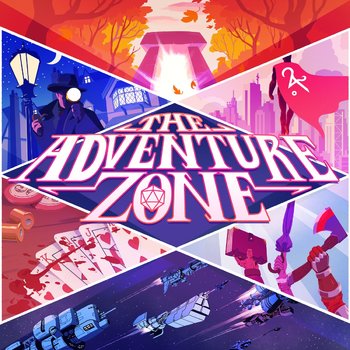 It's the Adventure Zone! note Clockwise from top: Amnesty, Commitment, Balance, Hootenanny, Dust, Elementary. Not pictured: Graduation, (K)Nights, Furry.
Griffin: I didn't expect it to go like that...
Travis: What did you expect to happen?
Griffin: YOU TO CATCH A FUCKING FISH IN THE FISH MINIGAME! Am I out of my mind? Is that an unreasonable expectation? To give them a fucking fishing minigame — Taako makes the lake float, Travis jumps in with a rapier like "let's get it done!" and Dad makes the fucking shit teleport away!
Clint: Welcome to the Adventure Zone, Griffin.
— Balance arc, San Diego Live show
Advertisement:

The Adventure Zone is an Actual Play podcast featuring the McElroy Brothers (Justin, Travis, and Griffin) playing assorted Tabletop RPGs with their father, Clint. The podcast began in late 2014 and new episodes are released every other Thursday.

The podcast initially focused on a single Dungeons & Dragons campaign, Balance, with Griffin as the Dungeon Master. Afterward the four McElroys took turns directing short experimental arcs until one of them, Amnesty (also DM'd by Griffin), was chosen for expansion into a full second season. As of Summer 2019, Amnesty has also finished as a series, as has Graduation with Travis as DM. The current campaign is 'Ethersea', with Griffin back as DM, which started May 6th, 2021.

A series of short, "experimental" arcs using various systems and run by alternating GMs, done to help decide what to do for Season 2 proper. Amnesty began as one of these before it was chosen to become the second season.