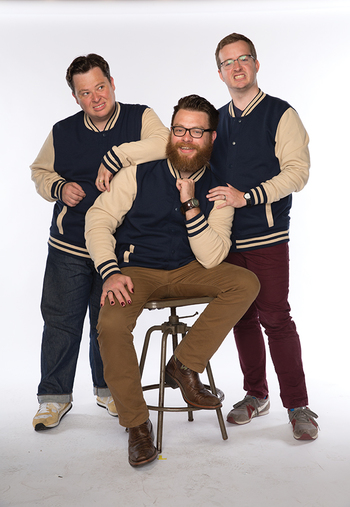 The McElroy brothers are Justin

McElroynote pronounced "Mackle-roy": a trio of internet entertainers and loveable boys from Huntington, West Virginia, best known for the advice podcast and web show My Brother, My Brother and Me, the D&D podcast The Adventure Zone with their father Clint, and the Polygon web series Monster Factory. They've amassed a large following for their oddball sense of humor and great chemistry with each other, with Griffin making it onto Forbes' "30 under 30" list

for 2017. Griffin and Justin also both worked as video game journalists for several years; the two were part of the founding staff of Polygon, where they worked as writers and editors from 2012 to 2018.

You can find a more extensive list of their works here.