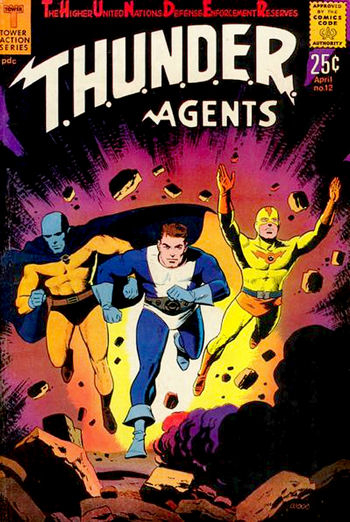 T.H.U.N.D.E.R. Agents is a comic-book series originally published by Tower Comics in the 1960s, which might be briefly described in X Meets Y fashion as The Fantastic Four from U.N.C.L.E.. The characters debuted in T.H.U.N.D.E.R. Agents #1 (November, 1965), created by Wally Wood. The series lasted for 20 issues, ending in November, 1969. It concerns the activities of The Higher United Nations Defence Enforcement Reserves, an international organization devoted to preserving the world from Diabolical Masterminds, Alien Invasions, and other threats too large for a single nation to handle alone.

The initial roster of elite T.H.U.N.D.E.R. agents was:

Since the fall of Tower Comics, the rights to T.H.U.N.D.E.R. Agents have been around a bit. Currently, DC Comics has the license and has been printing collections of the original stories in their Archives format. DC also launched a new T.H.U.N.D.E.R. Agents title in November 2010. It appears to be a "next generation" sequel to the original Tower stories, with NoMan being the only returning member (due to his effective immortality.)