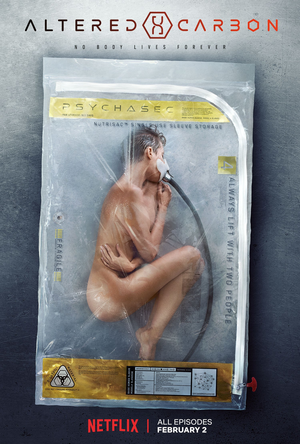 "Disorientation, visual and auditory hallucinations, and even low-grade amnesia are normal. But don't worry. This orientation will answer all of your questions. This is a cortical stack. As Protectorate citizens, we each have one implanted when we are one year old. Inside is pure human mind, coded and stored as DHF: Digital Human Freight. Your consciousness can be downloaded into any stack, in any sleeve. You can even needlecast in minutes to a sleeve anywhere in the Settled Worlds. A sleeve is replaceable. But if your stack is destroyed, you die."
— Opening Narration, Altered Carbon
Advertisement:

It's not uncommon for death not to be permanent in Fiction. In this case, a character survives their death by having their consciousness (and/or mind and/or soul) transferred to a replacement body, prepared just for that eventuality. This body is often a clone of the character, although this is not the case for robotic characters, naturally. Sometimes they've specifically raised an individual from childhood for this, in which case they may overlap with Familial Body Snatcher.

If a character has this set up to happen every time they die, it confers a type of Immortality. If this is the case for everyone in a setting, it causes Death Is Cheap.

If the body is already "occupied" by another consciousness and was not specifically prepared for this, it's Body Surf, instead.