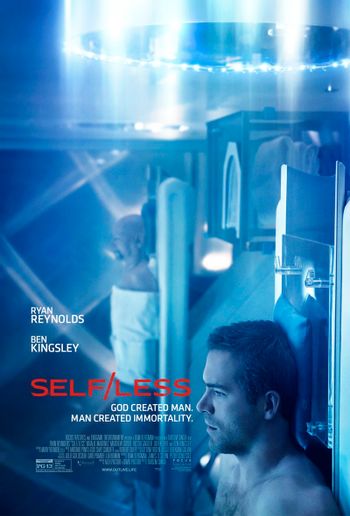 Self/Less is a 2015 film directed by Tarsem Singh and starring Ryan Reynolds, Ben Kingsley, Natalie Martinez and Matthew Goode. 20 Minutes into the Future, Damian Hale (Kingsley), an insanely wealthy real estate mogul, is dying from cancer. Following the lead of a business card he's slipped, Damian finds out about a process called "shedding", which will put his mind in an artificially-grown younger body (Reynolds). Afraid of dying, Damian agrees.

Unfortunately, the new body comes with a lot of hallucinations of locations and people. Albright, the head of the shedding process, assures Damian that this is normal and gives him medication to help with it. Damian is convinced there's more to the hallucinations than that. Cue the discovery of a dark secret behind the process of shedding...