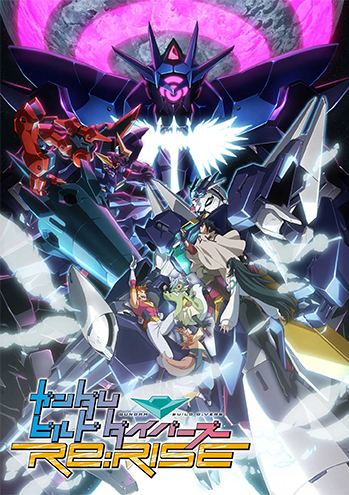 "What will I fight for? And what will I not accept?
In order to not give up on myself?"
"Let's go, Hiroto. To a faraway place, beyond the galaxy, and across the universe. As far as we can..."
— Eve
Advertisement:

It has been two years since the dramatic battle between Force Build Divers and the Coalition of Volunteers for the fate of the EL-Diver known as Sarah. Since then, the Virtual Reality MMORPG game "Gunpla Battle Nexus Online" has only continued to grow in popularity, as new updates have brought all-new dimensions, missions and other content to enjoy. The story focuses on four Divers - Hiroto, a mercenary player who wanders through different GBN dimensions as he searches for something he lost; Kazami, a streamer trying to roleplay as a Knight in Shining Armor superhero; May, a skilled but anti-social player who has so far only ever done solo missions; and Parviz, an excellent builder who is having trouble finding a team due to his issues actually controlling his mech. After accidentally discovering a seemingly new prototype dimension called Eldora, these four join together to form an all-new team Build Divers! However, not all of Eldora is as it seems, and it soon becomes clear the new team has stumbled upon something far bigger than they could have imagined...

The first season was originally uploaded onto YouTube via official channels related to Gundam from October 10 to December 26, 2019, with the second season premiering on April 9, 2020. Starting on January 28, 2020, it began airing on broadcast TV, with a brief hiatus due to the Coronavirus Disease 2019 Pandemic from May 14 to July 9, 2020.

A sidestory manga, Gundam Build Diver Rize, began serialization on November 26th, 2019. It tells the story of an EL-Diver named Rize who aspires to become a top-tier player without using any of the tricks EL-Divers are known for, and to that end, constructs a Super Robot version of the Core Gundam after previously witnessing Hiroto and using a variant of the base model to access the real world.

A "Where Are They Now?" Epilogue anthology titled After Stories was bundled with the show's Blu-Ray box, set several months after the series's conclusion.