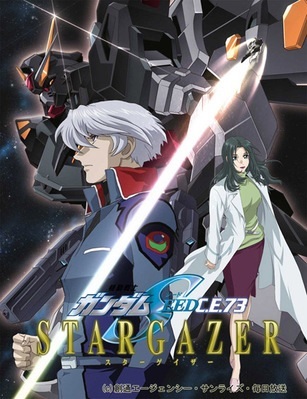 Mobile Suit Gundam SEED CE.73: Stargazer is a three episode ONAnote "Original Net Animation" — Stargazer was originally released online, rather than on TV or DVD. This was a bigger deal when it was released back in 2006 than it is now. set in Gundam franchise's Cosmic Era timeline. Taking place during the first months of the Second Alliance-PLANT War, and with regular flashbacks to the events of the First Alliance-PLANT War, it shows some of the wider implications of the war, and the people that it affected, soldier and civilian alike.

The series was broken into three fifteen minute episodes, and followed two distinct plot threads. In the first episode, Project: Stargazer scientist Selene McGriff and her colleagues try to evacuate from Earth to their orbital space station, as the first clashes between Coordinator terrorists, Blue Cosmos fanatics, and their masters in ZAFT and the EA begin rocking the planet. The second episode introduces us to Sven Cal Bayan, a ruthless child soldier raised by Blue Cosmos to fight for the EA. Sven and his teammates Shams Couza and Myudi Holcroft undertake a number of missions for the EA, growing steadily more unbalanced along the way. In the third episode, Selene and Sven's worlds collide with a vengeance when he and an EA task force are dispatched to capture the Stargazer, an experimental mobile suit that Selene has been developing for deep space exploration.

Released in the summer of 2006, Stargazer was never translated into English until it was bundled with the release of the Mobile Suit Gundam SEED Destiny Collector's Ultra Edition.