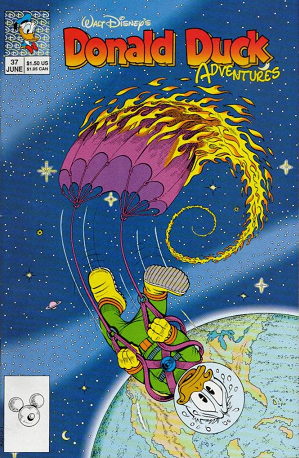 The process of atmospheric entry can be compared to hitting treacle after a ride across ice (or, if you're American, suddenly hitting a wall of peanut butter during an easy downhill jog). A fast-moving object compresses air before it, generating a lot of heat in the process. In fact, there are not many substances that can withstand the heat generated, and most spacecraft have an ablative heat shield that burns off during re-entry, which requires the spacecraft to come in at a fairly precise angle. This itself is a danger because if the craft comes in at too low an angle, it can literally bounce off the atmosphere and be lost in space (like a stone skipping on water), while if it comes in at too high an angle, the G-forces would likely kill (or seriously harm) the astronauts within. At even steeper angles, no heat shield can save the craft, and it will burn up as a man-made meteor.note Entry corridor precision is mostly an issue for deep-space vehicles like Apollo or Curiosity. Descending from low orbit is much harder to screw up, as the vehicle is already very close to the atmosphere and moving parallel to it; all it has to do is slow down a bit, and, even if it skips off the atmosphere, it'll come back down again later. It's also moving much more slowly when it enters the atmosphere than something returning from deep space.

One other side effect of this whole process is that the heat generated strips electrons from the atmosphere. Since radio waves can't penetrate the resulting cloud of plasma, older spacecrafts' communications systems would be rendered useless for the duration of the process, which lasts for several minutes. More modern spacecraft get around this by sending the signals up, to a satellite, thereby bypassing the plasma cloud.

Therefore, the situation will arise in Speculative Fiction when a spacecraft whose current ability (due to damage) to survive reentry is unclear does have to make an atmospheric entry. There may be a pre-announced time before communications are restored — it will pretty much never meet it. There will be a wait of a good thirty seconds or more, the ground crew will just be about ready to give up — then they will get a message from the crew, usually saying they are alright and coming in for a smooth landing.

This trope is sometimes used incorrectly when the object does not have to aerobrake because its method of propulsion allows it to slow down before entering the atmosphere. E.g., if Superman uses his flight powers, not restricted by such concerns as fuel, to de-orbit at highway speeds, there will be no exceptional heat.

See also Coming in Hot. Often followed by You Had Us Worried There. Contrast Frictionless Reentry. May be combined with Rocketless Reentry for a really serious scare.