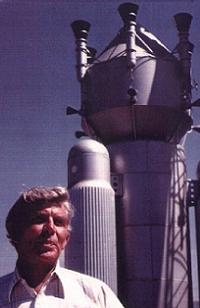 Harry Broderick and The Vulture
"Once Upon a Time...a junkman had a dream..."I wanna build a spaceship, go to the moon, salvage all the junk that's up there, sell it." So he put together a team: An ex-astronaut, and a fuel expert. They built a spaceship, and they went to the moon. Who knows what they'll do next?"
Advertisement:

Salvage 1 is an American science fiction series that aired for 16 episodes (of the 20 produced) on ABC during 1979. The pilot film, Salvage, aired on January 20, 1979, to high ratings. The movie starred Andy Griffith as junkyard owner Harry Broderick, Joel Higgins as Addison "Skip" Carmichael and Trish Stewart as NASA fuel expert Melanie "Mel" Slozar.