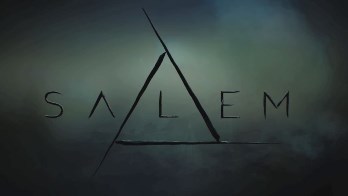 Salem is a supernatural horror series, and the first original series to be produced by the Chicago-based channel WGN America. It premiered on April 20th, 2014.
Advertisement:

After seven years at war fighting the French and their Native allies, John Alden returns to Massachusetts in 1692, where he finds his home town of Salem gripped by a witch panic led by his childhood rival, the fanatically devout preacher Cotton Mather. John attempts to rekindle a relationship with his pre-war lover Mary, only to discover that she has married the leader of the town, George Sibley. Unbeknownst to Alden, Mary has exerted a dark hold over her husband, and her control over the Puritans of Salem is growing ever stronger as she delves deeper into the forbidden arts of witchcraft.

The show is very loosely based on the historical Salem witch trials, with a major change: witches are real, and they're pulling the strings behind the scenes to get the Puritans to kill innocent people.

Mary in the Pillory

Mary in the Pillory