Literature / The Dreams in the Witch House 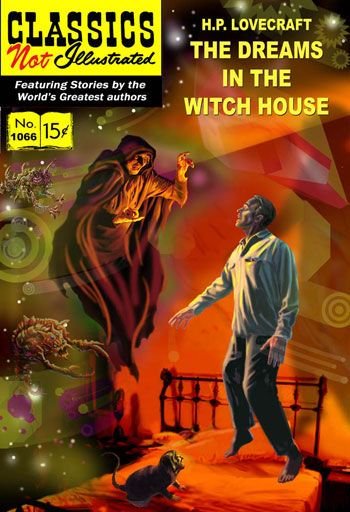 "The Dreams in the Witch House" is a horror story by H. P. Lovecraft, first published in 1933 in Weird Tales. It is considered to be part of the Cthulhu Mythos.

Walter Gilman, a student of mathematics at Miskatonic University, rents an attic room in a house that is rumored to be cursed and haunted by the spirit of a witch, Keziah Mason, who lived there in the 17th century. He experiences nocturnal visions of Mason, her familiar (a rat-like creature called Brown Jenkin), and strange creatures in otherworldly dimensions, and is offered knowledge beyond the reach of human science, but at a terrible cost.

Loosely used as the basis for the film Curse of the Crimson Altar.