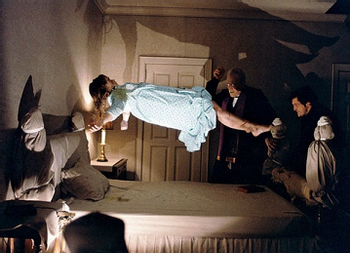 By the power of Almighty Christ, I cast the demons OUT of this page description!

Back in the day, exorcisms used to be all the rage. Any instance of mental illness was ruled to be Demonic Possession. You know what that means: head spinning, projectile vomit, and speaking in tongues. Pretty soon you have no choice but to haul in an exorcist to cast the demon out of the person in question and send it back to Hell.

These affairs are likely to be very dramatic. The exorcist will call upon a deity's name (usually Jesus, but sometimes the Holy Ghost, the Father, or another deity altogether if the religion is not of this world). There will be splashing of holy water, physical and emotional battles of will, fervent chanting in Latin, and perhaps some cool special effects. Expect the walls to bleed, the subject of possession to wail and shake in ways no human could imagine, and a demon to emerge either in physical or shadow form. Or so Hollywood would have you believe.

Nowadays, the Catholic church is loath to declare "possession" and perform exorcisms. Real life cases have proved that many cases of Demonic Possession are actually a result of severe psychological disorders (usually epilepsy or schizophrenia). Indeed, there are several symptoms which must be met for the church to consider that an exorcism is needed, such as being aware of events that the possessed individual should not have any way of knowing, and being burned by religious imagery. This trope still gets play in Religious Horror and other such genres, but is more likely to be subverted in more serious works.

Another point: Fictional portrayals of exorcism will sometimes involve "bell, book and candle." In real life, the Catholic casting-out ritual of bell, book, and candle is a form of excommunication, something quite different. The particular ritual involved is no longer practiced, regardless.

Finally, note that non-Catholic demons and exorcisms may look completely different, ranging from much gentler to much more violent. To this day in many cultures, mostly those where animist religions predominate, demonic possession is still considered a legitimate medical complaint. You will find that a few Christian denominations will consider an exorcism for the most ridiculous things.