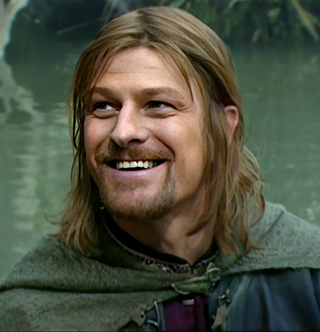 The Men of Gondor were known for their stout hearts and excellent dental hygiene.
"Boys, would you take a look-see at these pearly whites! Hell, I ain't seen teeth that straight that warn't store-bought."
— Buford Tannen's henchman, Back to the Future Part III
Advertisement:

Characters in nearly all media are portrayed as having pretty, white teeth, with nary a hint of any kind of tooth decay whatsoever. Even characters without any access to modern orthodontics and oral hygiene supplies will still have teeth that are just as straight and white as a modern person's. Just for the information, until the XX century, doctors were only providing three dental services: removal of sick teeth, replacing them with prosthetics (gold for those who could afford it), and splinting with metal wire (dating as old as ancient Egypt).

This is one of many ways that works of fiction often bow to modern standards of beauty. Actors tend to take special care of their teeth to make sure that they look presentable, so many actors have sparkling white teeth by default. Because Beauty Equals Goodness, we expect sympathetic characters to look attractive and wholesome. Yellow or rotten-looking teeth, by the same token, are often used as a Red Right Hand, showing evidence of a rotten soul.

Interestingly, blindingly white teeth aren't considered ideal in all cultures around the world. In some Asian countries, teeth dyed in black was not only practical, but also considered a beauty ideal note Because pale skin is also idealized in these countries, and was often archived with white foundation on the face, teeth would look yellow in comparison; blackening them gave the illusion of an open mouth when the person smiled. Inversely, this is the same reason dark-skinned people are often praised for having "white" teeth even if the person in question doesn't do anything special with them. Natural, healthy teeth are more of an off-white, light beige color. Artificial whitening procedures also tend to weaken the tooth enamel, making them less healthy.

The other side of this trope, however, is to commonly present people in the past as all having rotten, disgusting teeth due to their primitive oral hygiene. This is very much Truth in Television — for some time periods and regions, but not for always and everywhere. In reality, the rate of dental decay was rather low in the oldest time periods; even though the people may have spent much less time cleaning their teeth, they suffered less from tooth decay than we would expect today because their diets didn't have nearly as much tooth-rotting sugar (in some countries and periods, blackened teeth were a sign of wealth, because they meant one can afford to eat so many sweets). The big turn for the worse, at least when talking about European cultures, happened during The High Middle Ages. See the Other Wiki

This trope is so common that it's simply easier to list aversions, subversions and egregious examples.