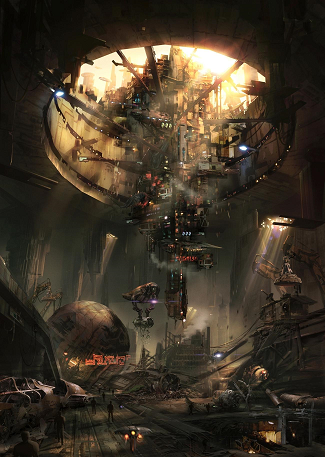 "Welcome to the underworld. My world. Here, there are worlds above worlds above worlds, going farther up than you can imagine. The trash of each one flows down to the one below, until it all ends up here."
— Grewishka, Alita: Battle Angel
Advertisement:

This used to be part of a sprawling metropolis, or maybe it was a whole city of its own, but something happened. Maybe an earthquake or another disaster buried it, or maybe they just decided to build a new city on top of it and, in time, forgot the old one. Maybe the burying was gradual, as people built higher and higher and gradually abandoned the older, lower parts of the city.

This isn't just any underground area; the Under City used to be above the earth before being buried by whatever occurrence. Could be a whole Ghost City, or a part of an Absurdly-Spacious Sewer. If it remains inhabited, it will likely end up as an Underground City and makes the Wretched Hive above it look like a paradise.