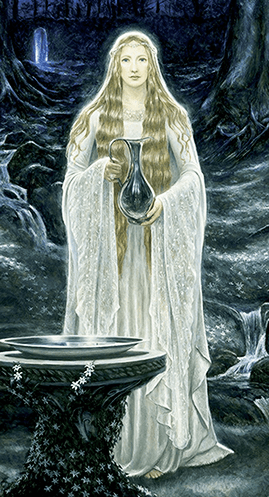 This figure is either metaphorically or literally dead, dressed in pale clothing that marks them as having one foot on the Other Side. While this character is rarely a classical ghost (see Cute Ghost Girl or Bedsheet Ghost for more typical ghost depictions), they are symbolically associated with death, often being stuck in the past. It may be difficult to determine if they are dead or alive, or if they are human or spirit. Despite Light Is Good, these ethereal characters may tend towards a more ambiguous morality. If the dress is stained with blood, better watch out.

Compare Mystical White Hair, Prophet Eyes, and Psychic Powers, which have similar connotations of "a connection to the otherworldly" for a character. Contrast White Shirt of Death, where dressing in white foreshadows an imminent death. In this trope, the white-clothed character has already died, at least metaphorically. Also Undead Barefooter, Magical Barefooter or any other variation, because characters with this kind of dress sometimes ditch footwear.

This trope has its origins in the legend of the White Lady, a figure in ghost stories throughout the world associated with loss of a loved one or a sense of purity before death. Stringy-Haired Ghost Girl and Yuki Onna are similar legends from Eastern media.

Supertrope to Wight in a Wedding Dress.

Note: white clothing has many different meanings. This is a specific one, and examples should explain the symbolism associated with the character. See Tropes in White for other possible uses of white color symbolism.