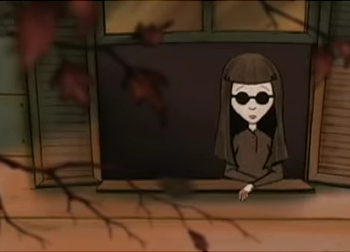 "You don't believe in monsters...do you?"
Advertisement:

Deadtime Stories is a rejected pilot for MTV written by Breehn Burns and Michael Dougherty.

The 8-minute pilot follows a young girl named Ebola, who has just been released from an insane asylum and is allowed home. After talking to her own reflection for a bit, she discovers that the neighbors across the street are abusive to their young daughter. Her parents don't believe her, and send her over with a cookie to say hello and meet the family.

Then things get creepy. Well, creepier...