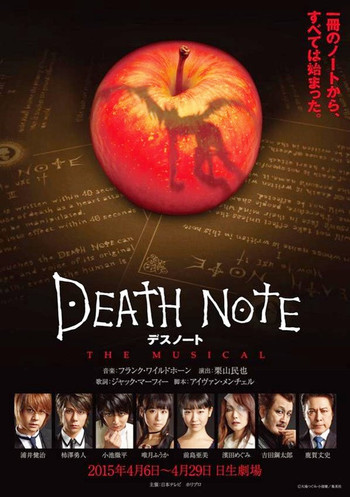 ♫ Killing indirectly, pen and ink and paper
Writing is the gun, I only have to aim
Could this be the hour, unimagined power
Waiting to devour who I say? ♫
— Light Yagami, "Hurricane"
Advertisement:

In 2015, a stage musical based on the popular shōnen manga Death Note opened exlusively in Japan and South Korea. The show is an adaptation of the manga's first arc, and the story remains more or less the same. Tired of living in an "unjust" world where criminals continue to run rampant, high school student Light Yagami stumbles upon a black notebook, dropped into the human world by a Shinigami named Ryuk, that holds the ability to kill a person just by writing their name within its pages. Hoping to use this newfound power to purge the world of evil, Light goes on a massive killing spree under the alias "Kira", while the mysterious detective L sets off to stop the bloodshed and take Kira down once and for all.

The show's script and songs were originally written in English by Ivan Menchell, Jack Murphy, and well-known Broadway composer Frank Wildhorn, and were subsequently translated to Japanese and Korean for the actual productions. It premiered at the Nissay Theater in Tokyo, Japan on April 5th, 2015. The show is apparently coming to America, but no set date has been announced.