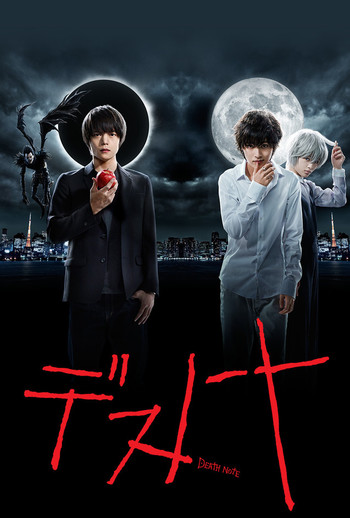 "L and Yagami Light. Neither will accept defeat. Why? Because whichever one loses, dies."
"It's possible I'm acting rashly. But this will be a great step forward for humanity. Creating a world without criminals, where only kind-hearted people can live. If that's what the world wants, then that day will come. I'm going to show you. The curtain's rising on the new world Kira will create."
— Light Yagami
Advertisement:

A live action TV drama series of the Death Note franchise. The story follows Light Yagami (Masataka Kubota), an ordinary college student with no ambitions beyond living a quiet life working for the government. One day after dealing with an old classmate known for harassing other people, a Shinigami named Ryuk (voiced by Jun Fukushima) drops a notebook called the Death Note in front of Light, with the notebook possessing the power to kill someone by writing their name down in it. While Light initially dismisses the notebook as ridiculous, when he sees his classmate is dead after writing his name down, Light begins to acknowledge its power is real. After being tempted to use the power of the notebook a second time in order to save his father, Light decides its burden is too much to bear but when Ryuk convinces him that the notebook could end up in the hands of someone evil, and that Light can use it however he wants, Light decides to use the notebook to purge the world of criminals becoming a Serial Killer known as Kira. When his activities catch the attention of a world-famous detective named L (Kento Yamazaki), an all-out battle between the two begins to see who can find the other first.