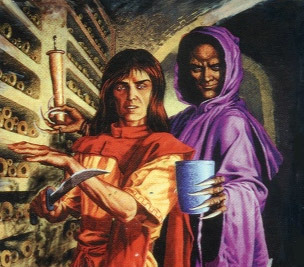 So wise, so helpful, he makes achieving your dreams a downhill trip.
"I live for the moment when I can turn something pure into something perverse."
— Graz'zt, The Book of Vile Darkness
Advertisement:

Not to be confused with The Corruption, which is more of an impersonal force, this character's primary role in the story is to bring out the worst in everyone around them. Often, their ultimate goal is getting the hero to do a Face–Heel Turn.

They fulfill this role willingly and knowingly — perhaps they are doing it For the Evulz, or because they seek validation by dragging others down to their level. Perhaps corrupting the hero advances their own agenda in some way — perhaps opening the hero to recruitment as an ally, perhaps something more subtle. Or maybe they just think that Humans Are Bastards and are trying to prove it.

In any case, do not expect these guys to get a whole lot of development themselves — they are less characters in their own right than they are the metaphorical devil on someone else's shoulder given physical form. If they do get much Character Development, they will probably be a Shadow Archetype for the character they are trying to corrupt. Expect them to be very smooth and clever, though precise competence level will vary.

This character will almost always be a serious villain, though they can be parodied by being made particularly inept. If they're not the Big Bad, expect them to still be an important villain with a lot of screen time — this trope doesn't work too well if you can't interact with the characters you're corrupting.

Do not expect these guys to pull a Heel–Face Turn; they are more likely to go into a Villainous Breakdown if they are definitively rejected. If they fail, it will probably be because they cannot comprehend good. Perhaps they want to rule with the hero, though this is by no means a universal trait, and not everyone who makes that offer is an example of this trope. May offer a Deal with the Devil at some point, but is just as likely to use mental and emotional manipulation to force their victim's hand without any sort of formal bargain — see Break Them by Talking and "The Reason You Suck" Speech for some favorite tactics.

Sometimes the Corrupter cares more about turning the hero than his own life, and invites them to Strike Me Down with All of Your Hatred!.

Can be of any evil alignment; a Lawful Evil who wants a new minion, a Neutral Evil who wants an apprentice to continue their work, or a Chaotic Evil who just likes screwing with people. If it turns out that it was all a Secret Test of Character or otherwise necessary, see A Chat with Satan.

Closely related tropes are Manipulative Bastard, The Chessmaster and Toxic Friend Influence. See The Vamp or Lady Macbeth if female. Will often overlap with an evil Warrior Therapist, an Evil Mentor or Treacherous Advisor. See The Corruptible for the typical victim of this kind of villain, and Incorruptible Pure Pureness for those immune to their wiles. Contrast The Conscience, which tries to put someone on the right path, and The Redeemer, who brings someone to atonement.

The Shoulder Devil is a literal version of this trope, though these days is one more likely to be played for comedy.

Not to be confused with the movie with the same name.