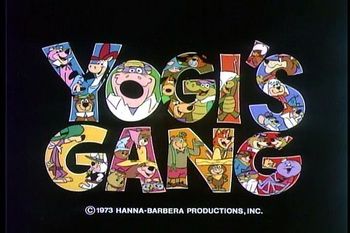 In the series, Yogi Bear and his friends travel around the world in a flying ark and meet villains who want to spread their faults and vices. One of the many big Massive Multiplayer Crossover shows popular in the 1970s and 1980s era of Hanna-Barbera, only this one is presumably trying to display a social conscience.

That's one trope-lution to stop pollution: