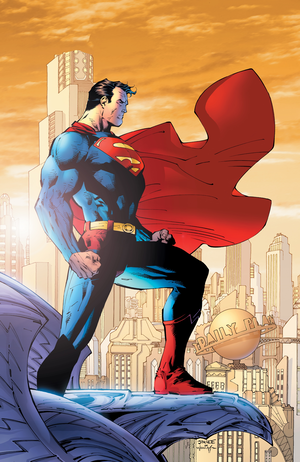 The Man of Steel. The Last Son of Krypton. The Son of Jor-El. Metropolis' favorite son. The Man of Tomorrow. Champion of the Oppressed. The Big Blue Boy Scout. The iconic Cape. The definitive Flying Brick. The Big Good of The DCU.

On the technologically advanced planet of Krypton, scientist Jor-El discovers that his planet will soon be destroyed by a pending natural disaster. No one will believe him, however, and further the Council of Scientists that run Krypton's government demand that neither he nor his wife Lara make no attempt to leave the planet, lest they further cause "needless panic." A man of honor, Jor-El promises exactly what they ask for, but in a desperate attempt to save what can be saved, Jor-El builds a small rocket vessel to carry his infant son, Kal-El, to a different planet — Earth. Because Kryptonians are Human Aliens, the boy can blend in without being seen as alien. Just before Krypton explodes, baby Kal-El's rocket is sent to Earth. He lands outside of the rural town of Smallville, a small town in Kansas (although it wasn't too clear originally — see Wikipedia for a full list of canonical locations

His powers include vast Super Strength and Super Speed , Flight, X-Ray Vision, Heat Vision, Super Breath, Freeze Breath, Nigh-Invulnerability (surviving supernova explosions and black holes), Super Senses, and possibly others, depending on the interpretation. When not fighting evil, he masquerades as a mild-mannered reporter for a great metropolitan newspaper, The Daily Planet; this career helps him find disasters and emergencies that much sooner and does not require him to closely account for his whereabouts to his employers. Naturally, the Clark Kent/Superman dichotomy—most particularly, the question of which is the "real" person and which is the "mask"—has been explored a great deal, and has changed over time (with Kent going from nervous, geeky klutz to sharp-witted Intrepid Reporter, among other changes). In the Golden and the Silver Age, Clark Kent was little more than a façade for Superman. After Crisis on Infinite Earths, this idea was reversed. In some versions, both are essential parts of who he is; others, particularly Alan Moore, see both as masks worn by Kal-El to interact with humanity. Both sides also tend to be a lot more psychologically/emotionally vulnerable than you'd expect. Given his powers, and the usual stereotypes about strength of his level, it would be easy to mistake him for a simplistic oaf; but Supes is actually quite a complex guy.

Originally created by Jerry Siegel (writer) and Joe Shuster (artist), two sons of Jewish immigrants who, after several tries, finally got him published in Action Comics #1, where he immediately took off; imitations of him pretty much created The Golden Age of Comic Books.note This wasn't their first attempt at the character they had in mind. Ironically, the first character they called "Superman" was intended as a villain with superior mental powers (also ironically looking a lot like Lex Luthor, Bald of Evil and everything). In truth, the character probably inspired the Ultra-Humanite, and the story's title "The Reign of the Superman" has inspired many Mythology Gags since. Superman was an immediate success not only in the comics but in the wider culture. In The '30s and The '40s, he was adapted into radio, serials and most crucially into cartoons by Max and Dave Fleischer. It was in the latter adaptation that Superman received his most iconic superpower, that of flight. The phenomenal success and appeal of the character filtered into the wider lexicon to such an extent, that Superman has arguably become a major folk character, idiomatic of someone who can literally do anything and embody any Wish Fulfillment one yearns for. Many aspects of the Superman mythos has fallen into the common lexicon. Kryptonite has arguably displaced Achilles' Heel, and the name of one of his supervillains has become a synonym for genius: brainiac.

On the Sliding Scale of Idealism vs. Cynicism, he and the series he stars in almost universally tends toward the idealistic side, being the iconic Cape.

Along with Batman and Wonder Woman, he's one of the Big Three of The DCU. He has also been a member of the Justice League of America on and off (mostly on) since its founding. In DC/Marvel crossover events, his counterpart/opponent is normally The Incredible Hulk as Hulk is one of the few Marvel characters who's a physical match for him.

Notable Comic Book Series
Notable Comic Book Stories
Notable Non-Canon stories
Superman Family Comic Series
Advertising
Animated Movies
Animated Series
Live-Action Movies
Live-Action Series
Music
Novels
Video Games
Pinball
Theater
Other versions
Parodies
Also worth mentioning: It's a Bird..., a graphic novel written by Steven T. Seagle which is a meditation on the Superman mythology through the eyes of someone who's been tasked with writing new installments of the series, and isn't sure he can do it because he doesn't feel anything in common with Superman. Then he really begins to think about the whole thing...

Example of:
Spin the Earth Backwards