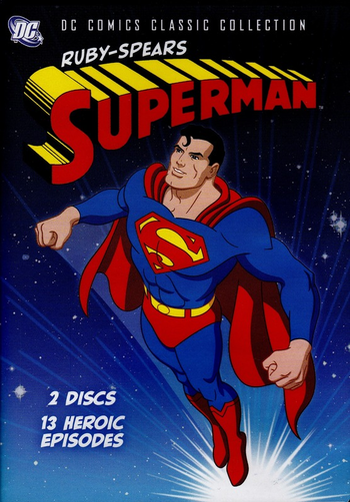 The third animated take on the Man of Steel (following the Superman Theatrical Cartoons and Filmation's The New Adventures of Superman), Ruby-Spears' Superman ran for 13 episodes on CBS in 1988. The series was not renewed as the licensing fee for the character was too high.

It managed to coincide with Superman's 50th anniversary, given the hero's 1938 debut.

Notable for being the first Post-Crisis take on Superman on television, although it takes most elements from the Christopher Reeve film series. Longtime comic book scribe Marv Wolfman acted as story editor, and character designs were made by longtime comic book artist Gil Kane. Amongst the writing team happened to be Larry DiTillio, who'd later go on to greater fame being half the creative drive behind Beast Wars.

Episodes were split in two parts, with the main plot being followed by a light-hearted four-minute "Superman's Family Album" segment, showcasing Clark Kent's upbringing on the Kent Farm.

Beau Weaver voiced the titular character, Ginny McSwain both voiced Lois Lane and voice directed (she would later be the voice director on The Batman), Mark L. Taylor voiced Jimmy Olsen, Stanley Ralph Ross voiced Perry White (he had previously written for Batman, Wonder Woman and G.I. Joe: A Real American Hero, and did voice work on Super Friends and Centurions) and Michael Bell provided the voice of Lex Luthor.

The full series is presently out on DVD.