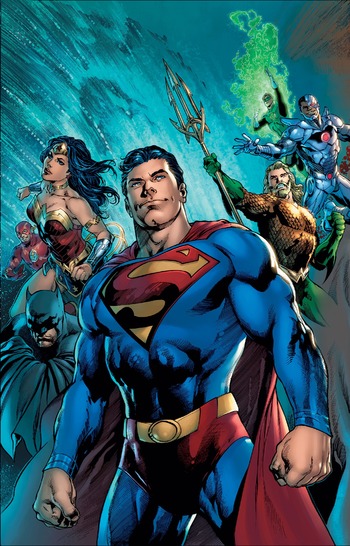 Superman's past has come to destroy his future!
The Man of Steel is a 2018 Superman six issue mini-series released by DC Comics, written by Brian Michael Bendis as a pilot episode for his upcoming era in charge of the Superman saga.
Advertisement:

Man of Steel takes a look back at Superman's past, revisiting the destruction of Krypton and Superman's life as a super hero as he confronts a mysterious villain who may or may not have major ties to Krypton's destruction. Meanwhile, something has happened to Superman's wife Lois and his young son Jon... their fates known only to the Man of Steel. The series has a small prelude in the landmark Action Comics #1000 (among other stories), as well as DC Nation #0.

Following this series, Bendis took over the Superman titles with a brand new Superman #1 and continuing with Action Comics #1001. As well, Supergirl (Rebirth) resumed with its previous numbering, picking up where this series leaves off.

Man of Steel features examples of these tropes: