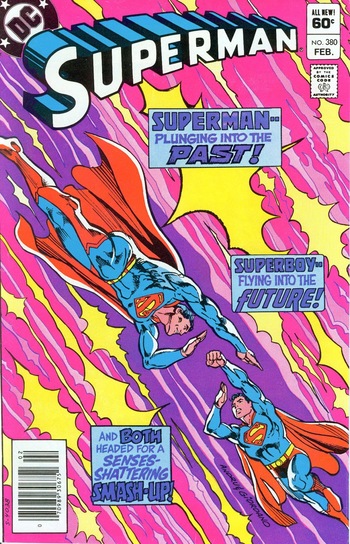 As far-out as it sounds, somehow my mind alone was catapulted forward through time into my own future! I can only guess— But I somehow switched minds with myself— meaning Superman's mind is now in the Superboy body I left behind in Smallville thirteen years ago!
— Superboy
Advertisement:

A Mind-Switch In Time was a Superman storyline published in 1983 and told through two titles: Superman Vol. 1 #380-382 and The New Adventures of Superboy (or Superboy Vol. 2) #38. Cary Bates and Curt Swan were the creative team assigned to the Superman title, and Paul Kupperberg and Kurt Schaffenberger were responsible for the Superboy side of the crossover.

In 1982, Superman flies into the time-barrier to carry out research on the habits of prehistoric men. However, he finds a massive tear disrupting the time-stream. Undaunted, he decides to plow his way through it.

In 1969, Superboy volunteers in Smallville's Soames Reform School during Thanksgiving Day, tries and fails to convince Lex Luthor to drop his petty grudge once again, and flies into the time-barrier to attend a Legion of Super-Heroes meeting in the 30th century. However, he finds a massive tear disrupting the time-stream. Undaunted, he decides to plow his way through it.

Against all odds, past and present Kal-El crash into each other. Since time travel physics dictate nobody can co-exist with himself at the same time, for which time-travelers become immaterial while visiting times where they already exist, both Clarks become intangible and phase into each other before being forcefully tossed back to their times of origin.

Nonetheless, their violent clash has had an unexpected result: teen and adult Clark Kent have swapped bodies.

Superboy finds himself fifteen years in the future, stuck in his older self's body, and finds himself surprised to learn about his future life: he lives in Metropolis now, he's a renowned journalist and newscaster, -despite Pa and Ma's advising him to lie low-, his old flame Lana Lang is his co-host but he has a romance with fellow Daily Planet co-worker Lois Lane, he has found his long-lost cousin and other Kryptonian survivors…

Superboy is adapting to his future self's life when he comes across a trouble he cannot handle: an emotion-eater called Euphor is mind-controlling Metropolis. Initially, Euphor seemed to mean well, but absorbing massive quantities of negative emotions is simultaneously increasing his power and insanity. Now Euphor has become convinced that he should take Metropolis' unhappiness -together with his free will- away for their own good, and Superman deserves to be kicked out of Metropolis for failing to fix their psychological issues. And he is willing to use brainwashed human shields to force the Man of Steel out of his own city. Superboy knows his older self would know how to handle Euphor, but he is not experienced enough to stop him.

Meanwhile in the past, Superman finds himself stuck in his teenager body, reliving the same day over and again, unable to tell anyone about being adult Clark stuck in a time loop. He cannot break the loop by going forward in time because of the disruption blocking the time stream. Clark is certain that he knows who the culprit behind his predicament is, but assuredly correct assumptions do not solve his problem; especially if he cannot act on them.