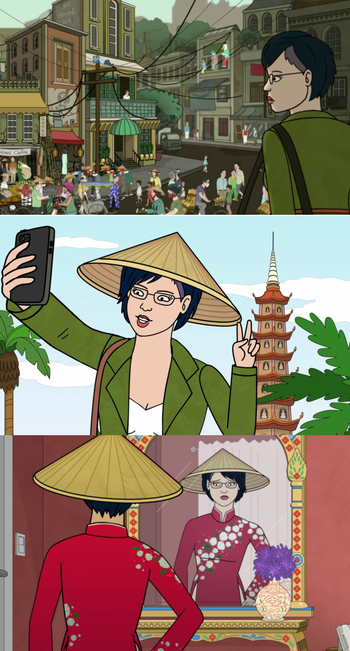 "Reason #1 to Go to Vietnam: To Reconnect With Your Ancestral Roots!"
"No, dude, I'm not gonna eat any of the street food. I'm only gonna eat, like, authentic shit. Home‐cooked meals, I'm gonna go visit the mosques. I wanna be somewhere where I'm surrounded by Muslims. You know? It's like, none of this confusion that we have here. Like, it's gonna be...it's gonna be amazing, man."
— Ramy Hassan, Ramy
Advertisement:

The children or descendants of Immigrant Parents often find themselves in a Child of Two Worlds situation — they were raised in one country while their family has roots from another. Alternatively, one might discover family history they didn't know they had or were initially reluctant to acknowledge. As a result of this cultural mishmash, these characters may grapple with questions of self-identity and want to reconnect with their heritage.

Cue the "Rediscovering Roots" Trip, a plot trope where someone returns to the motherland in an effort to reconcile their origins.

What spurs this trip varies. It could be a Family Disunion, a time of personal upheaval, a well-intentioned effort by the parents, Heritage Disconnect, or a more general feeling of unhappiness or dissatisfaction are common causes, but the trip will always be treated as an incredibly important and formative one. They'll see all the sights, meet friendly locals or relatives, unearth old family secrets, and immerse themselves in the traditions and cultures of the old country. By the end, they will almost always have a greater love and understanding of their bicultural identity and an appreciation for their family's journey, although sadder takes on this trope may focus more on how they continue to feel alienated from this culture due to their mixed background. Stranger in a Familiar Land may result.

Compare and contrast Immigrant Patriotism, where immigrants wholeheartedly embrace the culture of their new country. See also Journey to Find Oneself.

Not to be confused with Revisiting the Roots, which is when a work returns to its old elements.