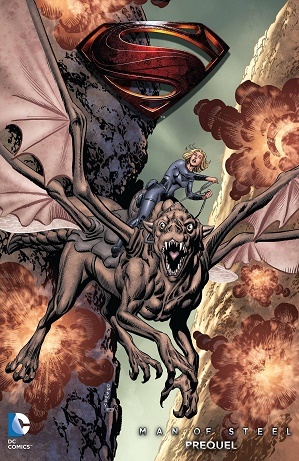 Man of Steel Prequel is a 2013 DC tie-in digital comic book by David S. Goyer, Geoff Johns, Zack Snyder and Sterling Gates. It serves as a prequel to Man of Steel and takes place in the DC Extended Universe.

The story focuses on Kara Zor-El, a distant ancestor to Jor-El and Kal-El, and delves a little into the past of Krypton some thousands of years before its destruction. Kara and a few other Kryptonians are chosen to scout the galaxy for planets worthy of terraforming, and she is placed into stasis as she makes the long journey to another world. However, when she suddenly awakens from her Kryptonian Popsicle sleep, she finds that the rest of the crew are dead and that her ship picked up an uninvited guest...