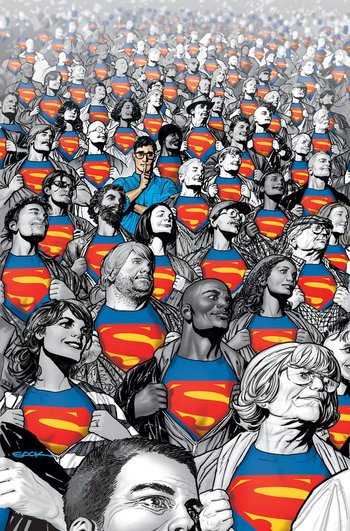 "I'm not from Krypton. I'm from Kansas."
This is not a Superman comic. This is Clark Kent like you've never seen him before.
Advertisement:

Max Landis takes a shot at writing Superman's origins with the help of multiple artists.

Superman: American Alien tells a version of the Man of Steel's upbringing. As a young Clark Kent discovers his powers, he begins to question his own identity, worrying about how he will never fit in. Eventually, he soon accepts his abnormality and embraces his powers, though continues to live among those much weaker than him much to the confusion of those who knows about his secret. Several horrific events and life-changing moments later, Clark slowly becomes The Hero that everyone will soon look up to for hope as well as the mild-mannered but competent journalist he disguises himself as.

Each issue takes place during a specific moment in Clark's life, i.e. the first issue is him as a young boy and the second him as a teenager. Of course, cameos and Mythology Gags are abound in this story.

Had a sequel in the works, named Superman: Agent of Batman, which focuses on Clark teaming with the Dark Knight to take down a rogue Justice League. When the actual comic fell through, Landis shared his outlines and concepts for it and various sequels

on his YouTube channel, which form a longer storyline he calls the "Kryptonian Epic".