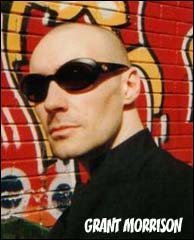 The legend who gave Superman his balls back.
"I'm the evil mastermind behind the scenes. I'm the wicked puppeteer who pulls the strings and makes you dance. I'm your writer."
— GRANT MORRISON to Animal Man, Animal Man #26
Advertisement:

(born 31 January 1960) is a Scottish writer, best known for the complex use of meta-fiction within their stories.

Their first published comic book work was Gideon Stargrave in 1978. After a few attempts at Marvel UK, they started writing Zenith for Britain's 2000 AD magazine. Like pretty much every superhero comic by English/Scottish/Irish writers during the eighties, it was both a superhero deconstruction and an excuse to take shots at Margaret Thatcher. It was because of Zenith that Morrison was hired to do a comic about Animal Man, a character few knew and nobody cared about, and started their long tradition of taking total losers and transforming them into something completely awesome. Next was the Doom Patrol, turning them into the greatest constant Mind Screw ever put into Four Colored pages.

After those critical successes, they wrote Arkham Asylum: A Serious House on Serious Earth, which became the best selling graphic novel up to that point, and featured selected members of Batman's rogues gallery - as well as the Dark Knight himself - as different aspects of non-comic book, medical insanity, such as schizophrenia and Obsessive-Compulsive Disorder. They then wrote several miniseries in Britain and for Vertigo Comics, and rose to stardom with the relaunch of Justice League of America, which featured DC's big superheroes together again for the first time in years. Besides being aptly described elsewhere on this website as "made up of back-to-back Crowning Moments of Awesome", Morrison's JLA also served as inspiration for the DCAU's Justice League, usually made up of back-to-back Crowning Moments of Awesome itself. At the time they were writing JLA, they were working on Vertigo Comics' The Invisibles, their most personal world, which they described as information given to them by Aliens during an abduction in Kathmandu.

Since then, they've worked with Marvel Comics, writing the controversial New X-Men run, and the Marvel Boy and Fantastic Four: 1234 miniseries. They returned to DC, and wrote The Filth, Seaguy, Vimanarama and We 3 for Vertigo before cutting loose in the DC Universe with the seven Seven Soldiers miniseries and the universally beloved All-Star Superman. They proceeded to yet again redefine the mindscrew in their Batman run, attempting to reconcile the character's 70 years' worth of interpretations, and finally realized their life long dream of somehow making the DC Universe a sentient being in Final Crisis. They then went on to work on the new Batman Incorporated and Action Comics series.

They also authored the non-fiction 2011 book Supergods: Our World in the Age of the Superhero, a mix between a critical history of superhero comics as they see it and autobiography.

Whether or not their stories are good is a topic of much debate. Lot of people love them, lot of people hate them, and a good amount think they're just some wacky person who can't write a story without severe Writer on Board and whose constant forays into This Is Your Premise on Drugs end up dominating their books to the detriment of plot and character. They did once state in the letters page of The Invisibles that their protagonist, King Mob, a Tuxedo and Martini Author Avatar only got laid all the time because the comic book was a magic spell Morrison was casting, and so making their main character get laid would get them laid in turn. And if you think they're joking, you haven't read Supergods...

Recognizable in real life by their shaved head and their already difficult to follow topics being uttered in a nearly incomprehensible accent. In an anecdote in the first volume of 52, their conversation with the other writers and editor goes like this:

They also appeared in Mom and Dad in a cameo role and came out as non-binary in October 2020.

Works by Grant Morrison with their own trope pages include:

I can see you!