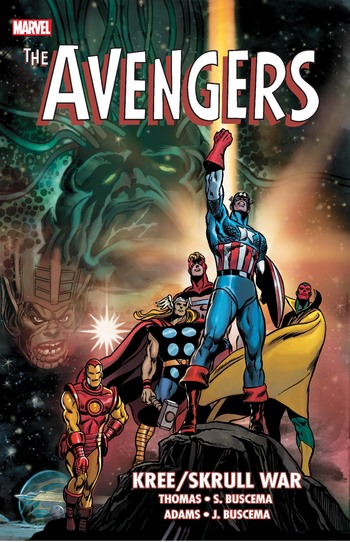 Even the stoic Captain America can have a Rage Against the Heavens from time to time...
Advertisement:

The Kree/Skrull War is a 1971-1972 story arc of The Avengers, where the heroes become involved in an increasingly hot Space Cold War between two powerful alien empires, the Kree (Human Aliens) and the Skrulls (shape-shifting Rubber-Forehead Aliens).

The story begins with an Easily Thwarted Alien Invasion, with Ronan the Accuser, the leader of the Kree Empire, launching a limited attack on the solar system to apprehend the renegade Captain Marvel (a Kree officer who has rejected the Empire and now fights for the humans of Earth) — And, while he's at it, destroy the potential future threat of the human race. However, the combined forces of a renewed strategic Skrull offensive and a forceful tactical riposte by the Avengers drive him off.

Such events (and the fact that Captain Marvel is himself a Kree alien, albeit a renegade) do not go unnoticed, and the powerful Senator H. Warren Craddock begins an investigation into alien activities on Earth that temporarily cripples the Avengers. Marvel becomes a hunted man, and attempts to evade government forces together with an old flame, DoD security consultant Carol Danvers. In the end, he, Quicksilver and the Scarlet Witch are captured by the Skrulls and taken to their homeworld, where the aliens attempt to force Marvel to build a doomsday device, to be used against his own people.

Having exposed the Skrull conspiracy on Earth, the Vision and Goliath, reinforced by Captain America, Thor and Iron Man, pursue the aliens into space, while Rick Jones is abducted by the Kree, who are preparing their own countermove. With the alien armadas of both the intergalactic superpowers converging on the solar system, doom appears imminent not only for humanity, but countless billions throughout local space...

At the time of publication, years before the original Star Wars, the series was unique for its epic scope and use of what would now be called Space Opera tropes, and met a glowing reception from the fans. Although parts of it may now appear dated, it exercised a tremendous influence on its genre. In more recent times, The Kree-Skrull War became notable as the origin of The Illuminati, a secret cabal of superheroes that caused the Secret Invasion and played a role in other crises, as in World War Hulk or Civil War. The origins of certain characters in the Young Avengers series were also retconned into it.

The film Captain Marvel, which is set in the Marvel Cinematic Universe, borrows some elements from the Kree–Skrull War, though it takes the story in a quite different direction.

The Kree/Skrull War provides examples of: