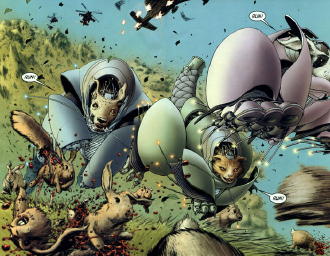 WE 3 is a 2004 Vertigo Comics miniseries by writer Grant Morrison and artist Frank Quitely. It has been described as a combination of The Terminator and Homeward Bound: The Incredible Journey, and it was well-received for being dynamic and innovative in both art and story.

The story follows a trio of animals—a dog ("Bandit" or "1"), a cat ("Tinker" or "2"), and a bunny ("Pirate" or "3")—that were cybernetically enhanced by The Government to work on covert military operations. When the project is scrapped, the animals—who have escaped from their military handlers—have to fend for themselves and escape the soldiers sent to destroy them.

The writing is notable for the innovative way the animals speak: their suits electronically translate their thoughts, and rather than sounding like human speech, the animals can only articulate on a very simple level. Each one even has its own speech patterns, determined by their intelligence; the dog has the closest thing to "normal" human speech, while the rabbit is only able to manage single-word concepts. The art is notable for being drawn by Frank Quitely in fine form.

The story is unusual for Morrison, in that despite the originality of the concept, it does not devolve into their usual habits of Breaking the Fourth Wall, Author Filibuster, and other Writer on Board eccentricities. The story's emotional impact is full of Morrison's belief in animal rights, though. It will hit you a lot harder if you're an animal lover.

For a more Rule of Cool story based around this concept, check out Brute Force.