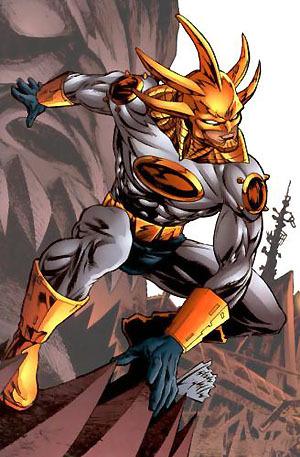 Meet the new Savior of All Mankind.
"A hero for the New Millennium... if he lives that long!"
—Tagline
Advertisement:

Aztek was a DC Comics superhero, who appeared in Aztek: The Ultimate Man and for a while was a member of the Justice League of America.

He was created by Grant Morrison and Mark Millar, and debuted in 1996, at the tail end of The Dark Age of Comic Books — against which he stands as a reaction. Aztek is The Cape: brightly dressed, noble to a fault, the kind of superhero who will happily take the time to search for a lost pet or fly halfway across the country to persuade a sick child's favourite celebrity to come and visit.note Actual examples from the series. —Ed. By way of contrast, Aztek: The Ultimate Man drops him into the kind of violent, crime-ridden urban setting one would expect to see a Nineties Antihero striding through. (It does, in fact, have a Nineties Antihero striding through it — up until halfway through issue 1, when he gets blown up by one of his many enemies.) Much trope-juggling ensues.

Uno was raised by a secret society to be the Champion of Quetzalcoatl and defend the world from the prophesied return of Tezcatlipoca; to this end he has been equipped with Charles Atlas Superpowers and a nifty white-and-gold supersuit. In the first issue of Aztek: The Ultimate Man, having finished his training, he arrives in Vanity City to await the fulfillment of the next part of the prophecy; after witnessing the explosive death of the city's official superhero, he adopts the identity of a man who was a collateral casualty of the explosion, and decides that superheroing would be a worthwhile use of his abilities while he's waiting for his true purpose to come knocking. In the second issue, the new hero is invited to become the city's new official superhero, and is dubbed "Aztek" by the media.

The series has a developing subplot about who really pulls the strings in the Q Society, and how they intend for Aztek to spend the waiting time.

Aztek: The Ultimate Man lasted only ten issues before being wiped out in The Great Comics Crash of 1996, but by then Aztek had already been established as a serious enough player to be invited into the Justice League of America, and his story continued in the JLA's own series (which, not entirely coincidentally, was being written at the time by Aztek's co-creator Grant Morrison). In the pages of Justice League of America, Morrison finished out the string-pulling subplot, and ultimately had Aztek, the JLA, and every other superpowered person on Earth unite against a world-threatening menace which was identified as the fulfillment of the Tezcatlipoca prophecy.

Years later, Steve Orlando continued Aztek's story by creating a new version of the character named Nayeli Constant in Justice League of America. Nayeli became Aztek after the helmet crashed into her apartment, updating her on everything that occurred with Uno and motivating her to move to Vanity City to finish his work. She later teams up with Wonder Woman so they can stop Tezcatlipoca from making a return (a nod to how Wonder Woman twice fought the god in the Pre-Crisis continuity Wonder Woman).