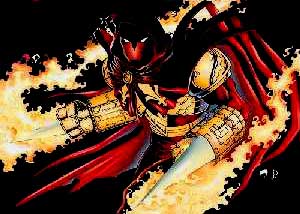 The DCU's Azrael first debuted with the 4-issue Batman: Sword of Azrael miniseries (October, 1992-January, 1993). Created by writer Denny O'Neil and artist Joe Quesada. The reason Azrael was created was to introduce a replacement for Batman during the Knightfall arc. For more information on the characters that have been Azrael, click here.

The original Azrael series was started in February 1995, which featured Jean-Paul Valley trekking around the world as Azrael following his stint as Batman, funded by Bruce Wayne, trying to discover his origins with the Sacred Order of St. Dumas. After that, his series kind of flattened out thanks to Jean-Paul being Exiled from Continuity and being turned into a Static Character. After being heavily involved in the Batman: No Man's Land arc, the series (now renamed Azrael: Agent of the Bat) mainly showed Azrael's random adventures. The series eventually fizzled out in an anti-climatic ending at issue #100 (May, 2003) with the death of Jean-Paul. Ironically, Jean-Paul just so happened to die at the same time that the Hush arc over in Batman's corner of the DC Universe was about half-way through, which concerned Batman re-evaluating how he interacted with most of his allies and enemies. Except for Jean-Paul Valley, Azrael. 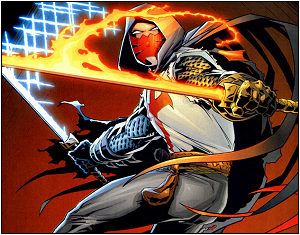 A new Azrael showed up in a three-issue Battle for the Cowl miniseries titled Battle for the Cowl: Azrael: Death's Dark Knight (May-July, 2009). Written by Fabian Nicieza and later David Hine, drawn by Frazier Irving. It starred Michael Lane, formerly the "Bat-Devil" from Three Ghosts of Batman). Then he got his own series, starting in December, 2009, and ending in May 2011 after 18 issues. This was followed by Lane's Azrael appearing in a sort of mini-Bat Family Crossover called Judgement on Gotham.

For a while, there was no word on the future of Azrael in the wake of the 2011 DC Relaunch. However, Michael Lane has appeared in Batman Incorporated #10, where he loans Batman the Suit of Sorrows.

However, what appears to be an amalgamation of both versions of Azrael has shown up in Batman: Arkham City in a side mission which may lead to a more prominent part in the sequel. And indeed, he does appear in another side mission in Batman: Arkham Knight. He's Michael Lane, sent by the Order to kill Batman. The player has to make the choice of whether he attempts to go through with the action (whereupon he is disarmed and arrested) or breaks free of his mental conditioning and goes off to destroy the Order.

In Batman and Robin Eternal, Jean-Paul finally makes his return, once more as Azrael and as a member of the Order. He's also one of a number of children connected to the mysterious Big Bad Mother.

In DC Rebirth, Azrael is one of the many characters featured in Detective Comics (Rebirth). He even gets a temporary costume that is a Shout-Out to the one he wore as Batman.

Jean-Paul Valley shows up in Batman: The Adventures Continue, a digital-first comic series set in the DC Animated Universe, even donning the Azbats armor there.

An older, eviler Jean-Paul Valley appears in Batman: Curse of the White Knight, but inspired to become a villainous Azrael by The Joker in a bid to destroy Gotham, and eventually dons the Az Bats suit. In a surprising twist, it's revealed he, not Bruce, is the true heir to the Wayne Family (due to a secret from their ancestors, where Bruce's anscestor murdered Valley's and stole his identity, meaning all family members after him, including Thomas, Martha, and Bruce, aren't actually members of the actual Wayne line).