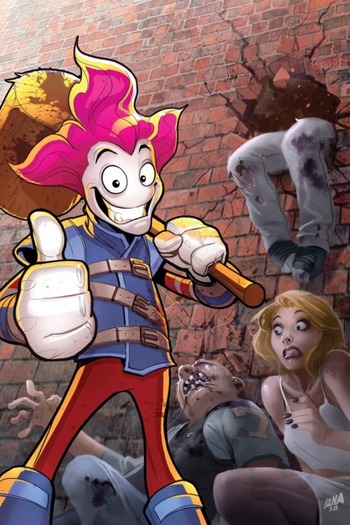 He doesn't fight evil.
He plays cruel tricks on it.
Advertisement:

Slapstick is a Super Hero character created by Len Kaminski and James Fry III, who first appeared in a four-issue limited series (November 1992-February, 1993) by Marvel Comics. Despite being voted by Marvel readers as the best new character of 1992, Slapstick was left in obscurity until his appearance in Avengers: The Initiative. His first ongoing series was announced as part of 2016's Marvel NOW! relaunch, starting in December 2016.

Steve Harmon, our protagonist, is the classic class clown, devoting his life to pulling pranks, telling tasteless jokes, being generally irritating and dreaming about the prettiest girl in school. One evening, in an attempt to get revenge on a classmate who blew the whistle on one of his pranksnote it involved a medical school cadaver and the school cafeteria, Steve dresses up as a clown and sneaks into a carnival passing through town. As it happens, the carnival was a trap created by the Evil Clowns from Dimension X in a scheme to kidnap people and enslave them for their Overlord. Seeing the clowns drag his friends through a magic mirror portal, Steve follows them through, just as the portal closes...

Steve is rescued by the Scientist Supreme of Dimension X, who explains that the incident caused a freak accident which has turned his body into "electroplasm", an indestructible and infinitely malleable substance. Using his circus mallet and his indestructible body, Steve smashes the Overlord's Mediocritizer, rescues his schoolmates, and destroys the mirror portal. As the dust clears, Steve is found by his friend Mike Peterson, who notes that he obviously just had an origin and thus should start fighting crime. Steve compromises by offering to play cruel tricks on it instead and dubs himself Slapstick.

After his original 1992 series, Slapstick briefly appeared with The New Warriors, appeared regularly as a recruit in Avengers: The Initiative, then was a regular member of Deadpool's Mercs for Money. In 2017, Slapstick appeared in Slapstick: Volume 2, a six-issue series created by Reilly Brown, Fred Van Lente, and Diego Olortegui.

Slapstick's primary ability is his highly agile and indestructible body, which gives him the composition of a living cartoon. While he can be burned, shot, smashed, crushed, twisted, and anything else, he recovers almost instantly with no harm. Slapstick's clown gloves have a molecular stabilizer to allow him to change to human form, and a sub-spacial storage pocket to allow him to hold a single item in Hammerspace. Slapstick can also get a temporary boost in size and strength if he is zapped with electricity.

The Awesome Slapstick provides examples of the following tropes: