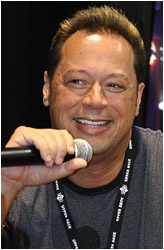 One day more... Another day, another destiny...
Advertisement:

Joseph "Joe" Quesada (born December 1, 1962 in New York City, New York) is an American comic book editor, writer and artist, who was the Editor-in-Chief at Marvel Comics between 2000 and 2011. Started off as an artist, gaining early attention with his variant covers for Valiant Comics books, but probably best known for his work on Daredevil. He took the editor job in 2000 and he was the longest-serving Marvel editor-in-chief other than Stan Lee himself, and is the first artist to attain that position. Currently holds the position of Marvel's Chief Creative Officer, tasked to "ensure that all portrayals of Marvel's characters and stories remain true to the essence of Marvel history."

Like nearly all of Marvel's EIC right from Stan "the Man" himself, Quesada is a very polarizing figure, especially among fans, and even then he has a "more respected than liked" reputation among his defenders. Artists, writers, and professionals have different opinions but overall he's seen as a positive figure within his staff. He became EIC in one of Marvel's lowest periods after their bankruptcy in The '90s, and he took the editor job in 2000 and his editorial decisions are credited with pulling Marvel Comics out of a slump, though they are still a shadow of the sales in the The Silver Age of Comic Books through the 1980s. Even then many argue that Marvel's return to form arguably belongs more to the success of its properties being turned to successful movies (the rights of which were sold to bail it out of bankruptcy to start with and whose returns led them to attract capital to build their own massively successful studios, with which Quesada has little real involvement) bringing new readers to comics than vice-versa. As an editor, Quesada is seen as being hands-on, much like Jim Shooter (ironic since Quesada disagrees with many of his decisions), rather than Stan Lee (who was quite laissez-faire). Quesada also had to run Marvel at a time when it was under ownership by hands-on figures such as Isaac "Ike" Perlmutter who became CEO of Marvel Comics in 2005 who also wanted to push his own agenda which undoubtedly added to his difficulty in managing both the creative and corporate sides of the business.

Is part of an interesting Production Posse with Kevin Smith. He was the artist for Kevin Smith's Daredevil comic, did the intro to Mallrats, and actually appeared in Chasing Amy and Jay and Silent Bob Strike Back. He also was a guest on Smith's Fatman on Batman podcast.

It's safe to say he's not very popular with Marvel fans, to say the least. Possibly because of that, his successors, Axel Alonso and C.B. Cebulski have steadily walked back the majority of those changes to Win Back the Crowd: Jean Grey and The Wasp are back (initially, Jean came back as her time-travelled teenage self, before her adult self eventually returned as well in Phoenix Resurrection), mutants in general are - with a couple of wobbles - now thriving, and Peter Parker and MJ Watson are seriously dating again with hints that Peter will propose. However, aspects of the Ultimate Universe have been retained, Brian Michael Bendis was still prominent until he took over Superman, and massive crossover events are still common. In other words, love him or loathe him, Quesada definitely made his mark on the Marvel Universe.