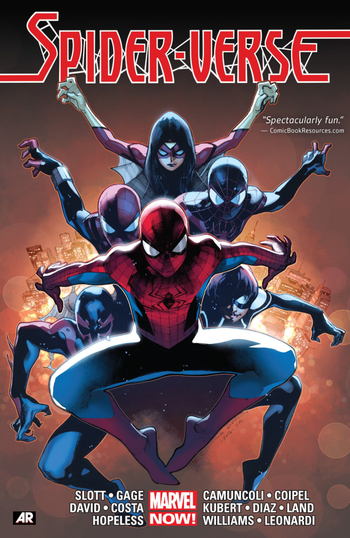 A lesser version of the Crisis Crossover, but bigger than a regular Crossover, is the Bat Family Crossover, which typically occurs around a group of titles that are related by the heroes appearing in them or the location in which they take place.

It's named for its repeated use by the group of superheroes around Gotham City, since so much happens in Gotham that affects everyone in the city, but has limited, if any effect on The DCU, with Batman usually ordering all of the other heroes to stay out. Maybe Superman will show up for an issue or two, but only because, well, he's Superman. Sometimes there will be long-term implications that eventually filter out into the larger DCU (such as the introduction of a new hero or villain), but it won't be anything that shakes up no-Bat titles' ongoing storylines the way a Crisis Crossover would.